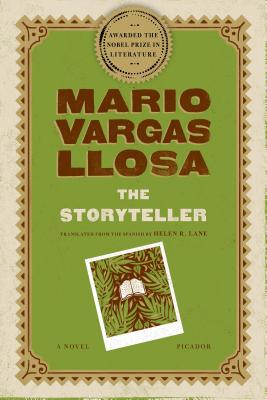 At a small gallery in Florence, a Peruvian writer happens upon a photograph of a tribal storyteller deep in the jungles of the Amazon. He is overcome with the eerie sense that he knows this man...that the storyteller is not an Indian at all but an old school friend, Saul Zuratas. As recollections of Zuratas flow through his mind, the writer begins to imagine Zuratas's transformation from a modern to a central member of the unacculturated Machiguenga tribe. Weaving the mysteries of identity, storytelling, and truth, Vargas Llosa has created a spellbinding tale of one man's journey from the modern world to our origins, abandoning one in order to find meaning in both.


Praise For The Storyteller: A Novel…

“Intellectual, ethical, and artistic, all at once and brilliantly so.” —The New York Times Book Review

“Brilliant . . . A whole culture is contained within these dreamy narratives.” —Raymond Sokolov, The Wall Street Journal

“A fascinating tale . . . with enormous skill and formal grace, Vargas Llosa weaves through the mystery surrounding the fate of Saul Zuratas.” —Time

“It is in the chapters narrated by the storyteller that the novel comes wonderfully alive, transporting the reader to a world where men hang suspended in a delicate web of cosmic relationships.” —Mark Dery, The Philadelphia Enquirer

Helen Lane contributed to In Praise of the Stepmother from Picador.
Loading...
or support indie stores by buying on