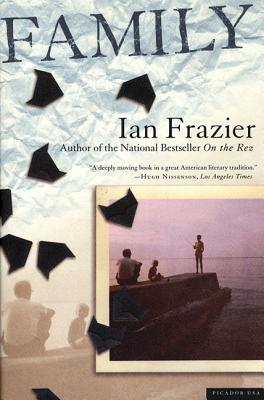 With wit and an unerring eye for detail, acclaimed author Ian Frazier takes readers on a journey through his family's story, his nation's history, and himself

Using letters and other family documents, Frazier reconstructs two hundred years of middle-class life, visiting small towns his ancestors lived in, reading books they read, and discovering the larger forces of history that affected them. He observes some of them during the British raid on Danbury, Connecticut, in the Revolutionary War; he follows others west as they pioneer in the wilderness of Ohio and Indiana; he visits the battlefields where they fought the Civil War. Frazier interviews old-timers, uncles, aunts, cousins, maids, and a beer-store owner who knew his dad. He pursues the family saga in aspect from trivial to grand, hoping for "a meaning that would defeat death."

Family is a poetic epic of facts, a chronicle of Protestant culture's rise and fall, a memorial, and a revised view of American history as romantic as it is cold-eyed.


“Mr. Frazier, in this remarkable history of an unremarkable family, plays both roles, the gossip and the pedant, balances skillfully, then adds his own insights as a loyal family member.” —David Willis McCullough, The New York Times Book Review

“[Frazier] is a writer of grace and charm.” —The Washington Post Book World

“It is a stunning book, written in sentences and paragraphs concealing emotional depth charges that explode across the gap from page to reader.” —Geoffrey Stokes, The Boston Sunday Globe

“Frazier takes the ordinary and clothes it with a sweetness that creates a special humanness for each family member.” —Cleveland Plain Dealer

“Mr. Frazier, in this remarkable history of an unremarkable family, plays both roles, the gossip and the pedant, balances skillfully, then adds his own insights as a loyal family member.” —David Willis McCullough, The New York Times Book Review

“A remarkable demonstration of Frazier's ability to write with rare, pure love and to make his feelings meaningful to casual passersby--his readers.” —A Time magazine Best Book of 1994

“The most unusual, compelling, and warmly received book of the season.” —New York magazine

“[Frazier is] a writer of uncommon grace and subtlety.” —Chicago Tribune

“Family is a keeper--an oddball classic that somehow manages to lodge itself squarely in the American grain.” —Malcolm Jones Jr., Newsweek

“Family grows from a look at one small, close-knit group of people into an appreciation of this whole country.” —Dominic Gates, The Seattle Times