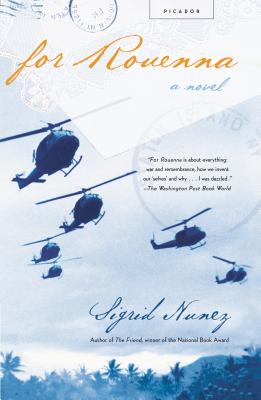 From the National Book Award-winning author of The Friend, one of the most celebrated novelists of her generation, the story of a woman's experiences in the Vietnam War

"After my first book was published, I received some letters." So begins Sigrid Nunez's haunting novel about the poignant and unusual friendship between a writer and a retired army nurse who seeks her out decades after their childhood in the same housing project. Among the letters the narrator receives is one from a Rouenna Zycinski, recalling their old connection and asking if they can meet.Though fascinated by the stories Rouenna tells about her life as a combat nurse in Vietnam, the narrator flatly declines her request that they collaborate on a memoir. It is only later, in the aftermath of Rouenna's shocking death, that the narrator is drawn to write about her friend--and her friend's war. Writing Rouenna's story becomes all-consuming, at once a necessity and the only consolation.

For Rouenna, an unforgettable novel about truth, memory, and unexpected heroism by one of the most gifted writers of her generation, is also a remarkable and surprising new look at war.


Praise For For Rouenna: A Novel…

“For Rouenna is about everything: war and remembrance, how we invent our ‘selves' and why; why we kill ourselves--or live. I was dazzled by this book.” —The Washington Post Book World

“Writing a nearly transparent prose, reminiscent of Richard Yates, Nunez takes us breathlessly through the slow unraveling of Rouenna's life and, like the events in Yates' stories, the details are harrowing.” —Los Angeles Times Book Review

“An entirely different kind of war novel...Nunez's Vietnam is assembled with a long lens and crafted in her spare, gorgeous prose....What emerges is something that feels like truth.” —San Francisco Chronicle

Sigrid Nunez is the New York Times bestselling author of The Friend, winner of the 2018 National Book Award, and of several other novels, including What Are You Going Through and The Last of Her Kind. She is also the author of Sempre Susan: A Memoir of Susan Sontag. Her work has been translated into more than twenty-five languages.
Loading...
or
Not Currently Available for Direct Purchase