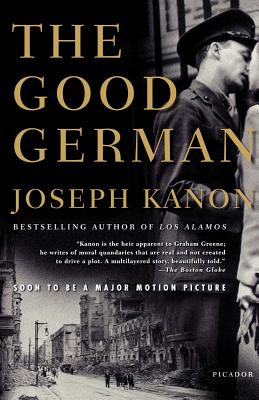 Set in Berlin just after the end of World War II, Joseph Kanon's The Good German, now a major motion picture, is a brilliant thriller about the end of one war and the beginning of another, by the bestselling author of Los Alamos.

Berlin, 1945. Hitler has been defeated, and Berlin is divided into zones of occupation. Jake Geismar, an American correspondent who spent time in the city before the war, has returned to write about the Allied triumph while pursuing a more personal quest: his search for Lena, the married woman he left behind. When an American soldier's body is found in the Russian zone during the Potsdam Conference, Jake stumbles on the lead to a murder mystery.

Jason Kanon's The Good German is a story of espionage and love, an extraordinary recreation of a city devastated by war, and a thriller that asks the most profound ethical questions in its exploration of the nature of justice, and what we mean by good and evil in times of peace and of war.


Praise For The Good German…

“[Kanon] is fast approaching the complexity and relevance not just of le Carré and Greene but even of Orwell: provocative, fully realized fiction that explores, as only fiction can, the reality of history as it is lived by individual men and women.” —The New York Times Book Review

“As he did in Los Alamos, Kanon demonstrates an eerie mastery of the evocative historical detail....You can feel the shattered glass crunching beneath your feet as you read. You can smell the smoke-scorched broken bricks.... Kanon is as ambitious a novelist as he is a gifted one.” —The Washington Post

“A terrific book...Kanon is the heir apparent to Graham Greene and early-and mid-passage le Carré, for he writes of moral quandaries that are real and not created to drive a plot....The multilayered story is beautifully told.” —The Boston Globe

“Gripping...Kanon has written a tale about the untenable choices war entails, and about the moral dangers of demonization. For American readers, the book cuts to the bone, coming at a time when we have become the demonized and are doing our best to avoid becoming
the demonizers.” —Newsday

JOSEPH KANON is the author of the novels Alibi, The Good German, Los Alamos and The Prodigal Spy. Before becoming a full-time writer, he was a book publishing executive. He lives in New York City.
Loading...
or support indie stores by buying on