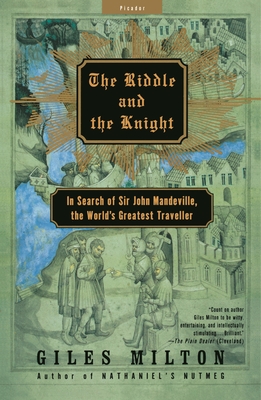 The Riddle and the Knight

In Search of Sir John Mandeville, the World's Greatest Traveler

Giles Milton's first book, The Riddle and the Knight, is a fascinating account of the legend of Sir John Mandeville, a long-forgotten knight who was once the most famous writer in medieval Europe. Mandeville wrote a book about his voyage around the world that became a beacon that lit the way for the great expeditions of the Renaissance, and his exploits and adventures provided inspiration for writers such as Shakespeare, Milton, and Keats. By the nineteenth century however, his claims were largely discredited by academics. Giles Milton set off in the footsteps of Mandeville, in order to test his amazing claims, and to restore Mandeville to his rightful place in the literature of exploration.


Praise For The Riddle and the Knight: In Search of Sir John Mandeville, the World's Greatest Traveler…

“Count on author Giles Milton to be witty, entertaining and intellectually stimulating....Brilliant.” —The Plain Dealer (Cleveland)

“A rare and excellent work that combines scholarship with intrigue, Milton's book may induce that wonderful swoon usually contracted after long hours researching libraries and labyrinths of history.” —Publishers Weekly

“Pioneer traveller or shameless charlatan, Sir John Mandeville had a huge influence both on the history of exploration and on all subsequent English literature. Here at last is a book which, while always readable and amusing, takes Sir John Mandeville as seriously as he deserves.” —John Julius Norwich