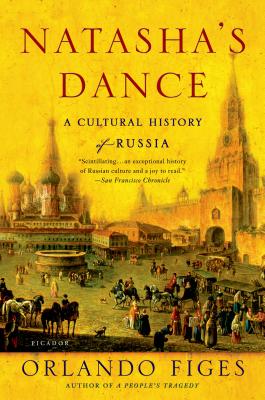 A Cultural History of Russia

A People's Tragedy, wrote Eric Hobsbawm, did "more to help us understand the Russian Revolution than any other book I know." Now, in Natasha's Dance, internationally renowned historian Orlando Figes does the same for Russian culture, summoning the myriad elements that formed a nation and held it together.

Beginning in the eighteenth century with the building of St. Petersburg--a "window on the West"--and culminating with the challenges posed to Russian identity by the Soviet regime, Figes examines how writers, artists, and musicians grappled with the idea of Russia itself--its character, spiritual essence, and destiny. He skillfully interweaves the great works--by Dostoevsky, Stravinsky, and Chagall--with folk embroidery, peasant songs, religious icons, and all the customs of daily life, from food and drink to bathing habits to beliefs about the spirit world. Figes's characters range high and low: the revered Tolstoy, who left his deathbed to search for the Kingdom of God, as well as the serf girl Praskovya, who became Russian opera's first superstar and shocked society by becoming her owner's wife.

Like the European-schooled countess Natasha performing an impromptu folk dance in Tolstoy's War and Peace, the spirit of "Russianness" is revealed by Figes as rich and uplifting, complex and contradictory--a powerful force that unified a vast country and proved more lasting than any Russian ruler or state.


Praise For Natasha's Dance: A Cultural History of Russia…

“Scintillating. . .an exceptional history of Russian culture and a joy to read.” —San Francisco Chronicle

“Stunning and ambitious. . .Figes captures nothing less than Russians' complex and protean notions regarding their national identity.” —The Atlantic Monthly

“Staggering. . .A vivid, entertaining, and enlightening account of what it has meant to be culturally a Russian over the last three centuries.” —Los Angeles Times

Orlando Figes is the author of A People's Tragedy, Natasha's Dance, and The Crimean War, among other books. His works have been translated into twenty-seven languages. A professor of history at Birkbeck, University of London and a frequent contributor to The New York Review of Books, Figes is the recipient of the Wolfson History Prize, the W. H. Smith Literary Award, and the Los Angeles Times Book Prize. He lives in London.
Loading...
or support indie stores by buying on