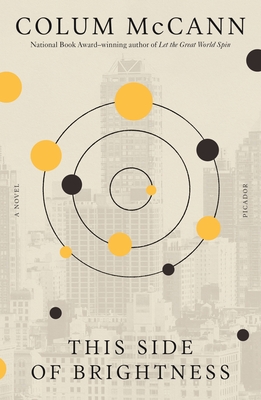 This Side of Brightness

From the author of Songdogs, a magnificent work of imagination and history set in the tunnels of New York City.

In the early years of the century, Nathan Walker leaves his native Georgia for New York City and the most dangerous job in America. A sandhog, he burrows beneath the East River, digging the tunnel that will carry trains from Brooklyn to Manhattan. Above ground, the sandhogs--black, white, Irish, Italian--keep their distance from each other until a spectacular accident welds a bond between Walker and his fellow diggers--a bond that will bless and curse the next three generations.

Years later, Treefrog, a homeless man driven below by a shameful secret, endures a punishing winter in his subway nest. In tones ranging from bleak to disturbingly funny, Treefrog recounts his strategies of survival--killing rats, scavenging for discarded soda cans, washing in the snow. Between Nathan Walker and Treefrog stretch seventy years of ill-fated loves and unintended crimes.

In a triumph of plotting, the two stories fuse to form a tale of family, race, and redemption that is as bold and fabulous as New York City itself. In This Side of Brightness, Colum McCann confirms his place in the front ranks of modern writers.


Praise For This Side of Brightness: A Novel…

“Luminescent. Colum McCann has taken the monumental force of the past and created from it a novel of wrenching emotional dimension, a novel resplendent with dignity.” —The Boston Globe

“Inside the gritty and perilous lives of the men who dug the tunnels under New York's East River, Irish novelist Colum McCann finds poetry....McCann's prose shines like the waters of the East River on a bright winter day.” —The Philadelphia Inquirer

Colum McCann is the author of  books including This Side of Brightness, Zoli, Songdogs and Let the Great World Spin. He has received the International IMPAC Dublin Literary Award, a Pushcart Prize, and was named the first winner of the Grace Kelly Memorial Foundation Award and the Princess Grace Memorial Literary Award. He lives in New York City.
Loading...
or support indie stores by buying on