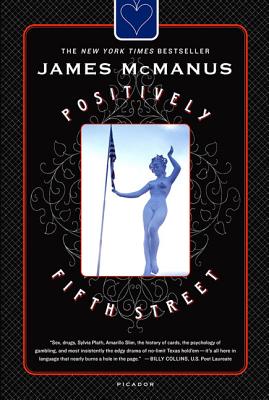 In the spring of 2000, Harper's Magazine sent James McManus to Las Vegas to cover the World Series of Poker, in particular the progress of women in the $23 million event, and the murder of Ted Binion, the tournament's prodigal host, purportedly done in by a stripper and her boyfriend. But when McManus arrives, the lure of the tables compels him to risk his entire Harper's advance in a long-shot attempt to play in the tournament himself. This is his deliciously suspenseful account of the tournament--the players, the hand-to-hand combat, his own unlikely progress in it--and the delightfully seedy carnival atmosphere that surrounds it. Positively Fifth Street is a high-stakes adventure and a terrifying but often hilarious account of one man's effort to understand what Edward O. Wilson has called "Pleistocene exigencies"--the eros and logistics of our competitive instincts.

“James McManus bet big and won. His Positively Fifth Street, an exhilarating chronicle of the 2000 World Series of Poker in Las Vegas, will go on the shelf with the classic that inspired it, The Biggest Game in Town, A. Alvarez's account of the 1981 event...As tension packed as any thriller . . . A great story.” —The New York Times Book Review (cover)

“Artfully woven...McManus captures the adrenaline-juiced tension of the game, and he also captures the anomalous mix of skill, bravado, gamesmanship, and sheer good fortune that a player needs to succeed; the bantering rivalry and camaraderie that engulf the survivors; and the knowledge, as Conrad once put it, that 'it is the mark of an inexperienced man not to believe in luck.'” —Michiko Kakutani, The New York Times

“Irresistible . . . McManus gives the reader a riveting over-the-shoulder view of the hand-by-hand action....His prose is flashy, funny, and unexpectedly erudite, but McManus hardly even needs it--with material this rich, he's holding the writer's equivalent of a royal flush.” —Time

“In writing about poker Jim McManus has managed to write about everything, and it's glorious.” —David Sedaris, author of Me Talk Pretty One Day

“James McManus is the only literary poker-player ever to have made it to the final table in 'the Big One,' and he did so by playing brilliantly. I admire his achievement, envy his skill and discipline, and was completely absorbed by his subtle, detailed, lively account of the longest four days of his life.” —A. Alvarez, author of The Biggest Game in Town