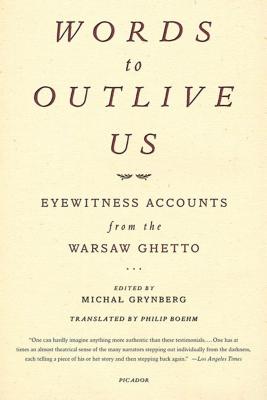 Words to Outlive Us

Eyewitness Accounts from the Warsaw Ghetto

This collective memoir--a mosaic of individual diaries, journals, and accounts--follows the fate of the Warsaw Jews from the first bombardments of the Polish capital to the razing of the Jewish district: the frantic exchange of apartments as the walls first go up; the daily battle against starvation and disease; the moral ambiguities confronting Jewish bureaucracies under Nazi rule; the ingenuity of smugglers; and the acts of resistance. Stunning in their immediacy, these urgent accounts challenge us to imagine the unimaginable.


Praise For Words to Outlive Us: Eyewitness Accounts from the Warsaw Ghetto…

“Tells the story in a new way, with riveting immediacy. . . The Diary of Anne Frank was a poignant solo piece for cello. Words to Outlive Us is a work of full orchestral anguish.” —Time

“One can hardly imagine anything more authentic than these testimonials.. . .One has at times an almost theatrical sense of the many narrators stepping out individually from the darkness, each telling a piece of his or her story and then stepping back again.” —Los Angeles Times

“One comes away from the book stunned by the remarkable energy and willingness to resist that so many demonstrated but haunted by the recognition of how little that resistance availed.” —The New Yorker

“A devastating portrait. . . If one can read only one book on the Warsaw Ghetto, this is it.” —Publishers Weekly (starred review)

The late Michal Grynberg, an associate of the Jewish Historical Institute in Warsaw, devoted decades of his life to compiling and publishing firsthand accounts from ghettos throughout Poland.