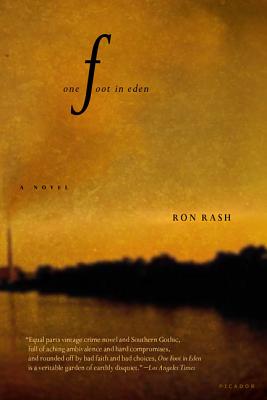 One Foot in Eden

Equal parts vintage crime novel and Southern Gothic, full of aching ambivalence and hard compromises, and rounded off by bad faith and bad choices, One Foot in Eden is a veritable garden of earthly disquiet." -Los Angeles Times

Will Alexander is the sheriff in a small town in southern Appalachia, and he knows that the local thug Holland Winchester has been murdered. The only thing is the sheriff can find neither the body nor someone to attest to the killing. Simply, almost elementally told through the voices of the sheriff, a local farmer, his beautiful wife, their son, and the sheriff's deputy, One Foot in Eden signals the bellwether arrival of Ron Rash, one the most mature and distinctive voices in Southern literature.


Praise For One Foot in Eden: A Novel…

“A classic tale of passion and tragedy. Each voice rings as true as the sound of an ax in the cold early morning air.” —Lee Smith, author of The Last Girls

“Equal parts vintage crime novel and Southern Gothic, full of aching ambivalence and hard compromises, and rounded off by bad faith and bad choices, One Foot in Eden is a veritable garden of earthly disquiet.” —Los Angeles Times

“Ruggedly beautiful...Reading Rash's tale is like listening to a plaintive mountain ballad about a time and place long vanished: the lyrics are sweet and mournful, wistful and dark. And, oh, does One Foot in Eden linger!” —The Charlotte Observer

“Rash's characters have a heroic quality as they struggle to fill the empty spaces in their hearts. They also have a poetic intensity.” —The Atlanta Journal-Constitution

“One Foot In Eden is a story of wild, almost primitive force and yet it is neatly and ingeniously put together. Ron Rash knows to the core the ways of those who yearn for what is just beyond their grasp. Here is a lasting experience.” —Fred Chappell, Poet Laureate of North Carolina

“One Foot in Eden is a forceful but never forced narrative. Rash moves his tragedy along with great authority, revealing motives that build to the complexity of each character as well as our fascination with them and the outcome of their lives. It is a finely polished novel.” —The Columbia State

“If you are a fan of writers such as Robert Morgan, Lee Smith and Fred Chappell, you'll be pleased to know they liked this novel and wrote glowing jacket notes. And no wonder: One Foot In Eden could have been written by any of these authors....Save yourself a nice stretch of time for this book. Once you start it, you will find it extremely hard to put down.” —The Anderson Independent

“In this fine, passionate work, Rash combines a murder mystery with the occasion of the flooding of a South Carolina Appalachian valley by Carolina power. The story of One Foot In Eden is simple, elemental. The conclusion has the force and inevitability of real tragedy...a tragedy that occurs in the ancient, brooding mountains of the Southern Appalachians.” —Don Noble, Alabama Public Radio

Ron Rash is the author of the prize-winning novels One Foot in Eden, Saints at the River and The World Made Straight, as well as several collections of poetry and short stories. He is the recipient of an O. Henry Prize and the James Still Award from the Fellowship of Southern Writers. For Saints at the River he received the 2004 Weatherford Award for Best Novel and the 2005 SEBA Best Book Award for Fiction. Rash holds the John Parris Chair in Appalachian Studies at Western Carolina University and lives in Clemson, South Carolina.
Loading...
or support indie stores by buying on