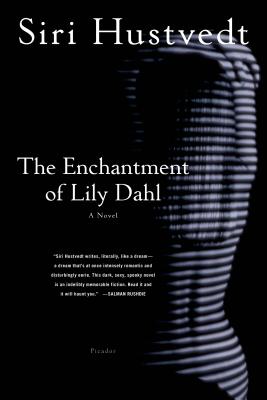 The Enchantment of Lily Dahl

The real secret at the heart of the book is the one that lies between reality and appearances, between waking life and dreams, at the place where imagination draws on its transforming powers in the face of death.


Praise For The Enchantment of Lily Dahl: A Novel…

“Siri Hustvedt writes, literally, like a dream--a dream that's at once intensely romantic and disturbingly eerie. This dark, sexy, spooky novel is an indelibly memorable fiction. Read it and it will haunt you.” —Salman Rushdie

“The Enchantment of Lily Dahl has the power to pull readers firmly into its orbit and to keep them there.” —The Village Voice

Siri Hustvedt was born in 1955 in Northfield, Minnesota. She has a Ph.D. from Columbia University in English literature and is the internationally acclaimed author of several novels, The Sorrows of an American, What I Loved, The Enchantment of Lily Dahl, The Blindfold, and The Summer Without Men, as well as a growing body of nonfiction, including Living, Thinking, Looking, A Plea for Eros, and Mysteries of the Rectangle, and an interdisciplinary investigation of the body and mind in The Shaking Woman or A History of My Nerves. She has given lectures on artists and theories of art at the Prado, the Metropolitan Museum of Art in New York, and the Academy of Fine Arts in Munich. In 2011, she delivered the thirty-ninth annual Freud Lecture in Vienna. She lives in Brooklyn.
Loading...
or support indie stores by buying on