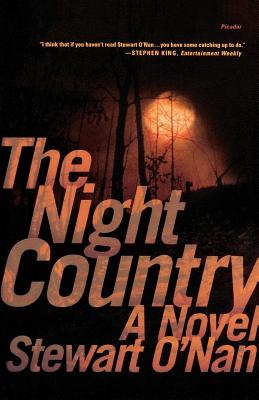 A ghost story that begins in everyday tragedy, from a distinctly American master of both forms: a "scary, sad, funny . . . mesmerizing read" (Stephen King)

At Midnight on Halloween in a cloistered New England suburb, a car carrying five teenagers leaves a winding road and slams into a tree, killing three of them. One escapes unharmed, another suffers severe brain damage. A year later, summoned by the memories of those closest to them, the three that died come back on a last chilling mission among the living.

A strange and unsettling ghost story, The Night Country creeps through the leaf-strewn streets and quiet cul-de-sacs of one bedroom community, reaching into the desperately connected yet isolated lives of three people changed forever by the accident: Tim, who survived yet lost everything; Brooks, the cop whose guilty secret has destroyed his life; and Kyle's mom, trying to love the new son the doctors returned to her. As the day wanes and darkness falls, one of them puts a terrible plan into effect, and they find themselves caught in a collision of need and desire, watched over by the knowing ghosts.

Macabre and moving, The Night Country elevates every small town's bad high school crash into myth, finding the deeper human truth beneath a shared and very American tragedy. As in his highly-prized Snow Angels and A Prayer for the Dying, once again Stewart O'Nan gives us an intimate look at people trying to hold on to hope, and the consequences when they fail.


Praise For The Night Country: A Novel…

“I think that if you haven't read Stewart O'Nan . . . you have some catching up to do.” —Stephen King, Entertainment Weekly

“With one foot in the genre of horror-supernatural and the other in literary fiction, this book defies classification.” —Brian Richard Boylan, San Francisco Chronicle

“Chilling...By juxtaposing the angst of teenage years with the hoarier dread of middle age, O'Nan has put his finger on how frightening and swift is the hand of fate.” —John Freeman, Minneapolis Star Tribune

“Stewart O'Nan is a literary ventriloquist. Each of his novels is is so different that he seems capable of doing anything he chooses.” —Dan Cryer, Newsday

Stewart O’Nan's novels include Last Night at the Lobster, The Night Country, and Prayer for the Dying. His novel Snow Angels was the basis of the 2007 film of the same name. He is also the author of the nonfiction books The Circus Fire and, with Stephen King, the bestselling Faithful. Granta named him one of the Twenty Best Young American Novelists. He lives in Pittsburgh.
Loading...
or
Not Currently Available for Direct Purchase