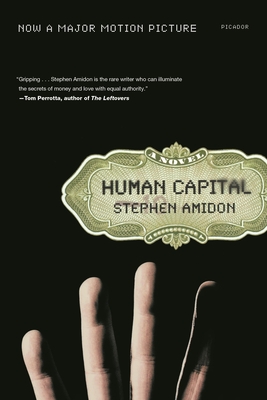 Stephen Amidon's Human Capital is a gripping novel of new money, old jealousies, and the secret lives of parents and children in the suburbs. Now a major motion picture!

It's the spring of 2001. Drew Hagel has spent the last decade watching things slip away—his marriage, his real estate brokerage, and his beloved daughter, Shannon, now a distant and mysterious high school senior. But as summer approaches, Drew forms an unexpected friendship with Quint Manning, the manager of a secretive hedge fund. Drew sees the friendship leading to vast, frictionless wealth, but Drew doesn't know that Manning has problems of his own: his Midas touch is abandoning him, his restless wife has grown disillusioned, and his hard-drinking son is careening out of control.

As the fortunes of the Hagels and the Mannings collide, a terrible accident gives Drew the leverage he needs to stay in the game. At once brilliantly observed and masterfully paced, Human Capital "deftly slices open the rich, corrupt heart of suburban America and lets its dark secrets bleed out" (Elle).

STEPHEN AMIDON's previous books include The New City and Subdivision. He lived and worked in London for fifteen years before returning to the United States, where he lives in Greenfield, Massachusetts, with his wife and children.

Praise For Human Capital: A Novel…

“A splendid novel with the satiric bite of Bonfire of the Vanities . . . terribly well-realized.” —The Seattle Times

“Amidon's novel is a wonderfully wicked satire on a twenty- first Century gilded age. . . . His book is more than just one family's story. It's a portrait of a whole society caught in the dead end that everyone insists will lead somewhere after all.” —Chicago Tribune

“A gripping, troubling, and incisive portrait of the way we live now . . . has the ambitious sweep and narrative power of a nineteenth-century novel.” —Tom Perrotta, author of Little Children