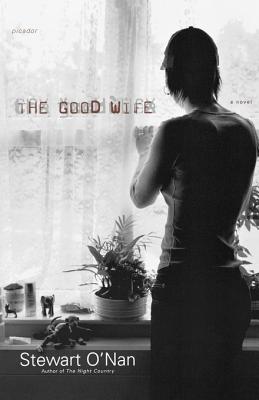 From a writer who reveals 'the plainness of everyday life with straightforward lyricism' (The New York Times Book Review), the story of one remarkable, average woman.

On a clear winter night in upstate New York, two young men break in to a house they believe is empty. It isn't, and within minutes an old woman is dead and the house is in flames. Soon after, the men are caught by the police. Across the county, a phone rings in a darkened bedroom, waking a pregnant woman. It's her husband. He wants her to know that he and his friend have gotten themselves into a little trouble. So Patty Dickerson's old life ends and a strange new one begins.

At once a love story and a portrait of a woman discovering her own strength, The Good Wife follows Patty through the twenty-eight years of her husband's incarceration, as she raises her son, navigates a system that has no place for her, and braves the scorn of her community. Compassionate and unflinching, Stewart O'Nan's The Good Wife illuminates a marriage and a family tested to the limits of endurance.


Praise For The Good Wife: A Novel…

“One of the most authentic contemporary political novels I've read by an American writer. . . . [O'Nan] creates a mood so intense that, as long as the novel lasts, the reader can't escape it.” —Nell Freudenberger, The New York Times Book Review

“The Good Wife is powerful, unforgettable. . . . O'Nan knows what Evan S. Connell knew . . . that an unassuming woman might be surprisingly complicated . . . .Patty Dickerson is a wonderful character, and this novel is astonishing.” —The Washington Post Book World

“A moving, lyrical, assured piece of work . . . O'Nan is an experienced explorer of the irrationalities of being human.” —The Atlanta Journal-Constitution

Stewart O’Nan's novels include Last Night at the Lobster, The Night Country, and Prayer for the Dying. His novel Snow Angels was the basis of the 2007 film of the same name. He is also the author of the nonfiction books The Circus Fire and, with Stephen King, the bestselling Faithful. Granta named him one of the Twenty Best Young American Novelists. He lives in Pittsburgh.
Loading...
or
Not Currently Available for Direct Purchase