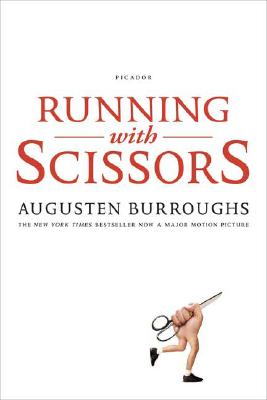 The #1 "New York Times "Bestseller An "Entertainment Weekly" Top Ten Book of the Year Now a Major Motion Picture"" "Running with Scissors" is the true story of a boy whose mother (a poet with delusions of Anne Sexton) gave him away to be raised by her unorthodox psychiatrist who bore a striking resemblance to Santa Claus. At the age of twelve, Burroughs found himself amidst Victorian squalor, living with the doctor's bizarre family, and befriending a pedophile who resided in the backyard shed. The story of an outlaw childhood where rules were unheard of, and the Christmas tree stayed up all year-round, where Valium was consumed like candy, and if things got dull, an electroshock therapy machine could provide entertainment. The funny, harrowing, and bestselling account of an ordinary boy's survival under the most extraordinary circumstances. Running with Scissors Acknowledgments
Gratitude doesn't begin to describe it: Jennifer Enderlin, Christopher Schelling, John Murphy, Gregg Sullivan, Kim Cardascia, Michael Storrings, and everyone at St. Martin's Press. Thank you: Lawrence David, Suzanne Finnamore, Robert Rodi, Bret Easton Ellis, Jon Pepoon, Lee Lodes, Jeff Soares, Kevin Weidenbacher, Lynda Pearson, Lona Walburn, Lori Greenburg, John DePretis, and Sheila Cobb. I would also like to express my appreciation to my mother and father for, no matter how inadvertently, giving me such a memorable childhood. Additionally, I would like to thank the real-life members of the family portrayed in this book for taking me into their home and accepting me as one of their own. I recognize that their memories of the events described in this book are different than my own. They are each fine, decent, and hard-working people. The book was not intended to hurt the family. Both my publisher and I regret any unintentional harm resulting from the publishing and marketing of Running with Scissors. Most of all, I would like to thank my brother for demonstrating, by example, the importance of being wholly unique.

Praise For Running with Scissors: A Memoir…

"Running with Scissors is hilarious, freaky-deaky, berserk, controlled, transcendent, touching, affectionate, vengeful, all-embracing. . . . It makes a good run at blowing every other [memoir] out of the water."--Carolyn See, The Washington Post

"[Running with Scissors] promotes visceral responses (of laughter, wincing, retching) on nearly every page. . . . Funny and rich with child's-eye details of adults who have gone off the rails."--The New York Times Book Review

"The anecdotes can be so flippant, and so insanely funny (quite literally), that the effect is that of a William Burroughs situation comedy."--The New York Times

"Burroughs defies the 'woe is me' stigma of modern memoir with a raucous recounting of his loony teenage years."--Entertainment Weekly (grade: A)

"A memoir that is both horrifying and mordantly funny."--San Francisco Chronicle

"Reads like David Sedaris writing The Hotel New Hampshire."--The Boston Globe "Burroughs has memorialized his bizarre childhood, showing off a dark wit that often rivals that of David Sedaris--while telling a true story that would make even Sedaris cringe."--New York

"Screamingly funny . . . In the end, the book celebrates Burroughs's resilient, upbeat spirit, which helps him surmount one of the weirder childhoods on record."--Deirdre Donahue, USA Today

"[Running with Scissors] will transport you."--Vogue

"Irreverent, scurrilous, profane, licentious, horrific, and vile. It'll warp your mind, upset the neighbors, and lower your standing in the community. In other words, it's funny as hell."--Elle (Nonfiction Book of the Year)

"Written with humor and clear affection for its oddball characters, Running with Scissors is a story of shocking discovery and unlikely survival."--The Onion

"Running with Scissors is Dave Peltzer with a whoopee cushion attached . . . you're just thankful to read a memoir that's genuinely memorable, not mawkish."--The Observer (London)

"Running with Scissors is a story so strange it could never be fiction . . . a huge critical and commercial success . . . deftly written, smart, and funny."--GQ (UK)

"A lasting treasure a gorgeously written true-life story destined to be cherished and quoted long after its last page is read . . . bravely stands as a life-affirming survival guide for all the misfits of the world."--The Tampa Tribune

"It's gross, it's shocking and its humor is blacker than a thousand midnights . . . But this hilarious, provocative, and oddly touching book draws you into a bizarre world and keeps you rooting for its unusual narrator to survive, thrive, and break free."--The Hartford Courant

"Brutal, disturbing, and often wildly funny . . . a stirring testament to a boy's strength in an environment of unfathomable heartache and dysfunction."--Star Tribune

"A surreal and entertaining trip through a young life most readers will thank God wasn't theirs . . . Burroughs never lets his readers forget that stuck in the middle of all the madness is a confused boy."--The Plain Dealer (Cleveland)

"Bound to please fans of dark humor . . . Burroughs's account, full of frightening and hilarious images, is an entertaining, moving tale of an unconventional 1980s coming of age. It could be the one book you remember reading this summer."--Fort Worth Star-Telegram

"If you love Sedaris, you'll fold over laughing with Running with Scissors."--Genre

"Burroughs tempers the pathos with sharp, riotous humor . . . Edgier, but reminiscent of Dave Eggers's A Heartbreaking Work of Staggering Genius, this is a survival story readers won't forget."--Booklist

"Beautifully written with a finely tuned sense of style and wit . . . This memoir of a nightmarish youth is both compulsively entertaining and tremendously provocative."--Publishers Weekly

Augusten Burroughs is the #1 "New York Times" bestselling author of "Dry, ""Magical Thinking, " and, most recently, "Possible Side Effects, " which were also "New York Times" bestsellers. Augusten has been named one of the fifteen funniest people in America by "Entertainment Weekly." He lives in New York City and western Massachusetts.
Loading...
or
Not Currently Available for Direct Purchase