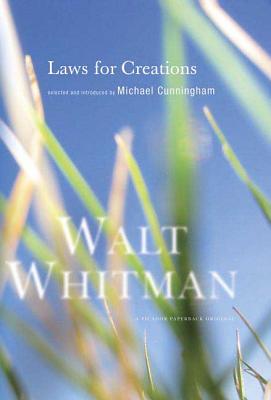 In Walt Whitman, Michael Cunningham sees a poet whose vision of humanity is ecstatic, democratic, and sensuous. Just over a hundred years ago, Whitman celebrated America as it survived the Civil War, as it endured great poverty, and as it entered the Industrial Revolution, which would make it the most powerful nation on Earth. In Specimen Days Michael Cunningham makes Whitman's verse sing across time, and in Laws for Creations he celebrates what Whitman means to him, and how he appeared at the heart of his new novel.

Just as the Pulitzer Prize-winning The Hours drew on the life and work of English novelist Viriginia Woolf, Specimen Days lovingly features the work of American poet Walt Whitman. Bringing together extracts from Whitman's prodigious writings, including Leaves of Grass and his journal, Specimen Days, Michael Cunningham's Laws for Creations provides an introduction to one of America's greatest visionary poets from one of our greatest contemporary novelists.


Praise For Laws for Creations…

"Inclusion of the untitled first-published version of "Song of Myself" and Whitman's less-studied prose will interest those more familiar with his work, and Cunningham's unique presentation of Whitman's writings-both his own esoteric favorites and the poet's most famous poems-will entice newcomers."- Publishers Weekly

Walt Whitman was an American poet, essayist, journalist, and humanist. He was a part of the transition between Transcendentalism and realism, incorporating both views in his works. Whitman is among the most influential poets in the American canon, often called the "father of free verse".

Michael Cunningham is the author of A Home at the End of the World, Flesh and Blood, The Hours (winner of the PEN/Faulkner Award and the Pulitzer Prize), Specimen Days, By Nightfall, The Snow Queen, and A Wild Swan, as well as Land's End: A Walk in Provincetown. He lives in New York.
Loading...
or support indie stores by buying on