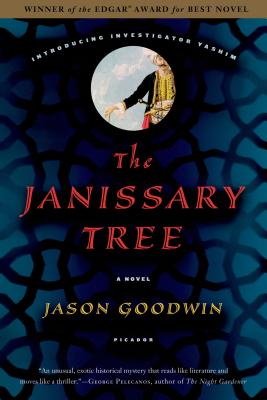 WINNER OF THE EDGAR AWARD FOR BEST NOVEL

This first book in the Investigator Yashim series is a richly entertaining tale, full of exotic history and intrigue, introduces Investigator Yashim: In 1830s Istanbul, an extra-ordinary hero tackles an extraordinary plot that threatens to topple the Ottoman Empire

It is 1836. Europe is modernizing, and the Ottoman Empire must follow suit. But just before the Sultan announces sweeping changes, a wave of murders threatens the fragile balance of power in his court. Who is behind them? Only one intelligence agent can be trusted to find out: Yashim Lastname, a man both brilliant and near-invisible in this world. You see, Yashim is a eunuch.

He leads us into the palace's luxurious seraglios and Istanbul's teeming streets, and leans on the wisdom of a dyspeptic Polish ambassador, a transsexual dancer, and a Creole-born queen mother. And he introduces us to the Janissaries. For 400 years, they were the empire's elite soldiers, but they grew too powerful, and ten years ago, the Sultan had them crushed. Are the Janissaries staging a brutal comeback?


Praise For The Janissary Tree: A Novel (Investigator Yashim #1)…

“A work of dazzling beauty...the rare coming together of historical scholarship and curiosity about distant places with luminous writing...a meditation on a vanished world that hovers like an apparition over today's grim headlines.” —The New York Times Book Review (Front page) on Lords of the Horizons: A History of the Ottoman Empir

“An unusual, exotic historical mystery that reads like literature and moves like a thriller.” —George Pelecanos, author of Drama City

“In this engaging novel, the reader is treated to a history lesson about the Ottoman Empire of the nineteenth century, a travelogue that brings the ancient city of Istanbul to life and a spellbinding story all in one. . . . This novel will keep you engrossed from start to finish.” —The Roanoke Times

“A triumph of the first order.” —BookPage

JASON GOODWIN is the Edgar Award–winning author of the Investigator Yashim series. The first five books—The Janissary Tree, The Snake Stone, The Bellini Card, An Evil Eye, and The Baklava Club—have been published to international acclaim, alongside Yashim Cooks Istanbul, a cookbook of Ottoman Turkish recipes inspired by the series. Goodwin studied Byzantine history at Cambridge and is the author of Lords of the Horizons: A History of the Ottoman Empire, among other award-winning nonfiction. He lives with his wife and children in England.
Loading...
or support indie stores by buying on