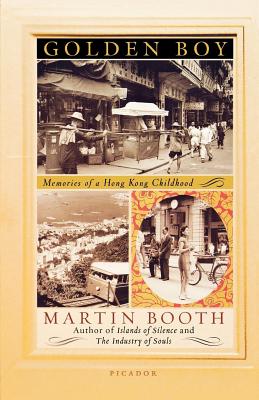 Memories of a Hong Kong Childhood

At seven years old, Martin Booth found himself with all of Hong Kong at his feet when his father was posted there in 1952. This is his memoir of that youth, a time when he had access to corners of the colony normally closed to a gweilo, a "pale fellow" like him. From the plink plonk man with his dancing monkey to Nagasaki Jim, and from a drunken child molester to the Queen of Kowloon (the crazed tramp who may have been a Romanov), Martin saw it all--but his memoir illustrates a deeper challenge in his warring parents. This is an intimate and powerful memory of a place and time now past.


Praise For Golden Boy: Memories of a Hong Kong Childhood…

“One of the most original and engaging memoirs of recent years. Personal, witty, and true.” —The Times (London)

Martin Booth (1944-2004) was the bestselling author of novels including Hiroshima Joe, Islands of Silence, and The Industry of Souls, which was shortlisted for the Booker Prize. Another novel, A Very Private Gentlemen, was adapted into the 2010 movie, The American, starring George Clooney. He also wrote several nonfiction books, including Cannabis: A History, Opium: A History, and the memoir Golden Boy: Memories of a Hong Kong Childhood. Booth was born in England, but spent much of his childhood in Hong Kong, a location that would deeply inspire his writing. He moved back to England at the age of 20, and started his literary career as a poet. He worked as a schoolmaster, a job he held until 1985, when the success of Hiroshima Joe allowed him to devote himself full-time to his writing. At the time of his death in 2004, he was living in Devon, England.
Loading...
or support indie stores by buying on