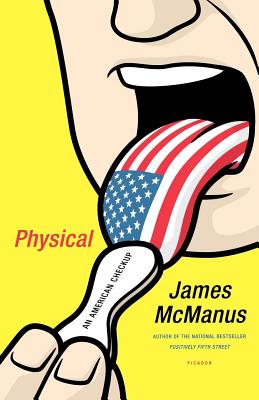 When hard-living, middle-aged American writer James McManus gets a three-day executive checkup at the Mayo Clinic, he is immediately forced to confront his mortality. Will he survive his own cardiovascular system and genetic inheritance long enough to see his young daughters grow up? With great candor and wit, McManus explores not only his own health but also that of the health care system itself and the political realities that have hamstrung stem cell research--which could help his eldest daughter's diabetes. Physical is an unabashed, wrenching, and often hilarious portrait of unwellness in America.


Praise For Physical: An American Checkup…

“This is fascinating material, ripe for exploration, and McManus is a terrific writer--sharp-eyed and sharp-tongued, and lots of fun to read--even when dwelling on grisly topics like colonoscopies and eye-trauma surgery.” —The New York Times Book Review

“An entertaining and often insightful look at one man's experience with the health care system.” —San Francisco Chronicle

“Powerful . . . McManus is a serious gambler, and in his new book, Physical, he proves that he is no less serious about God's roll of the dice, particularly when the roll's outcome might involve McManus himself, or his children, or his country. . . . Like Thomas Lynch's The Undertaking, Physical is a lively examination of mortality.” —Los Angeles Times

“McManus is a charming, self-mocking, often hilarious guide, and his story becomes a cautionary tale for those of us who, like McManus, may have lost the way in taking care of ourselves.” —Chicago Tribune

“A freewheeling riff on James McManus's own physical state, and, by circuitous extension, the nation's. McManus writes a boisterous, jokey prose, which makes for high entertainment, even when he's discussing his sigmoid colon.” —Men's Journal

“McManus does amazing high-energy riffs on themes like our belief in our own immortality, and assesses the manner and personalities of his doctors as keenly as they examine him.” —Publishers Weekly

“Most health books are written by . . . healthy people. McManus is the slacker Everyman. . . . With wit and honesty he stares himself in the mirror and cries, 'Uncle!' ” —The News & Observer

“Soul-searching and personal history . . . delivered with a combination of emotion and self-deprecating humor.” —Kirkus Reviews

“[McManus] spins an account of a doctor's appointment into a lively volume that combines memoir, meditations on fatherhood, and polemics on stem-cell research. What pulls these strands together is the author's frank and zippy voice, a high-low hybrid that's at home with both Dante and Jay-Z.” —Time Out New York

“Physical is a romp through the American health care system that manages to be almost as sexy as Positively Fifth Street, and even more eclectic.” —The San Diego Union-Tribune