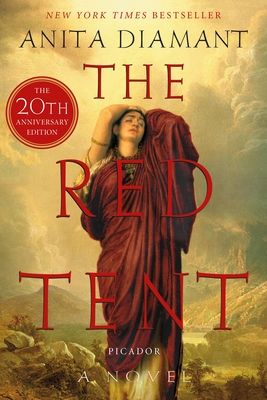 A decade after the publication of this hugely popular international bestseller, Picador releases the tenth anniversary edition of The Red Tent.

Her name is Dinah. In the Bible, her life is only hinted at in a brief and violent detour within the more familiar chapters of the Book of Genesis that tell of her father, Jacob, and his twelve sons.

Told in Dinah's voice, Anita Diamant imagines the traditions and turmoils of ancient womanhood--the world of the red tent. It begins with the story of the mothers--Leah, Rachel, Zilpah, and Bilhah--the four wives of Jacob. They love Dinah and give her gifts that sustain her through childhood, a calling to midwifery, and a new home in a foreign land. Dinah's story reaches out from a remarkable period of early history and creates an intimate connection with the past.

Anita Diamant is the author of The Red Tent, a word-of-mouth bestseller and the Booksense Best Fiction selection. She is also the author of the novels Good Harbor, The Last Days of Dogtown and Day After Night, a collection of essays, Pitching My Tent, as well as six books about contemporary Jewish life, including The New Jewish Wedding and Choosing a Jewish Life: A Guidebook for People Converting to Judaism. Diamant grew up in Newark, New Jersey, and Denver, Colorado. She has a bachelor’s degree from Washington University in St. Louis and a master’s in English from the State University of New York at Binghamton. She lives in Massachusetts with her husband.

“Diamant vividly conjures up the ancient world of caravans, shepherds, farmers, midwives, slaves, and artisans....Her Dinah is a compelling narrator that has timeless resonance.” —Merle Rubin, The Christian Science Monitor

1 . Read Genesis 34 and discuss how The Red Tent changes your perspective on Dinah’s story and also on the story of Joseph that follows. Does The Red Tent raise questions about other women in the Bible? Does it make you want to re-read the Bible and imagine other untold stories that lay hidden between the lines?

2. Discuss the marital dynamics of Jacob’s family. He has four wives; compare his relationship with each woman?

3. What do you make of the relationships among the four wives?

4. Dinah is rich in “mothers.” Discuss the differences or similarities in her relationship with each woman.

5. Childbearing and childbirth are central to The Red Tent. How do the fertility childbearing and birthing practices differ from contemporary life? How are they similar? How do they compare with your own experiences as a mother or father?

6. Discuss Jacob’s role as a father. Does he treat Dinah differently from his sons? Does he feel differently about her? If so, how?

7. Discuss Dinah’s twelve brothers. Discuss their relationships with each other, with Dinah, and with Jacob and his four wives. Are they a close family?

9. In the novel, Rebecca is presented as an Oracle. Goddesses are venerated along with gods. What do you think of this culture, in which the Feminine has not yet been totally divorced from the Divine? How does El, the God of Abraham, Isaac, and Jacob, fit into this?

11. The book travels from Haran (contemporary Iraq/Syria), through Canaan and into Shechem (Israel), and into Egypt. What strikes you about the cultural differences Dinah encounters vis-à-vis food, clothing, work, and male-female relationships.

12. In The Red Tent, we see Dinah grow from childhood to old age. Discuss how she changes and matures. What lessons does she learn from life? If you had to pick a single word to describe the sum of her life, what word would you choose? How would Dinah describe her own life experience?