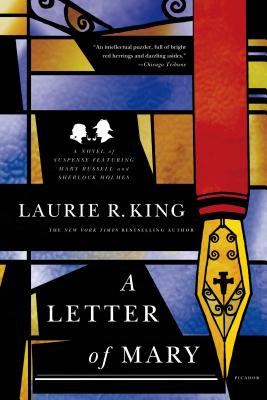 A Letter of Mary

The third book in the Mary Russell–Sherlock Holmes series.

It is 1923. Mary Russell Holmes and her husband, the retired Sherlock Holmes, are enjoying the summer together on their Sussex estate when they are visited by an old friend, Miss Dorothy Ruskin, an archaeologist just returned from Palestine. She leaves in their protection an ancient manuscript which seems to hint at the possibility that Mary Magdalene was an apostle—an artifact certain to stir up a storm of biblical proportions in the Christian establishment. When Ruskin is suddenly killed in a tragic accident, Russell and Holmes find themselves on the trail of a fiendishly clever murderer. A Letter of Mary by Laurie R. King is brimming with political intrigue, theological arcana, and brilliant Holmesian deductions.


Praise For A Letter of Mary: A Novel of Suspense Featuring Mary Russell and Sherlock Holmes (A Mary Russell Mystery #3)…

“A lively adventure in the very best of intellectual company.” —The New York Times Book Review

“Witty, literate . . . There's nothing elementary about King's take on period details or the behavior of her characters.” —Orlando Sentinel

“The game's afoot. And a lively, well-plotted game it is.” —The Philadelphia Inquirer

“Elegant . . . Laurie R. King continues to inhabit Sir Arthur Conan Doyle's Sherlock Holmes character like an inspired actor, faithful to the role yet adding so much of her own that he becomes far more than the sum of his quirks.” —San Jose Mercury News

“I report that Laurie R. King's A Letter of Mary delights me as much as its two predecessors. . . . I thoroughly enjoyed this book; I also admired it.” —The Boston Sunday Globe

“Superb . . . The great marvel of King's series is that she's managed to preserve the integrity of Holmes's character and yet somehow conjure up a woman astute, edgy, and compelling enough to be the partner of his mind as well as his heart.” —The Washington Post