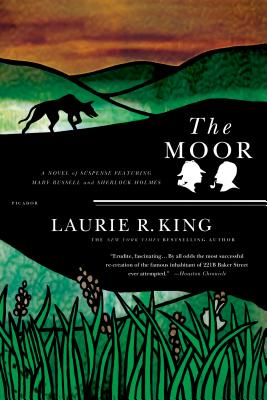 In the eerie wasteland of Dartmoor, Sherlock Holmes summons his devoted wife and partner, Mary Russell, from her studies at Oxford to aid the investigation of a death and some disturbing phenomena of a decidedly supernatural origin. Through the mists of the moor there have been sightings of a spectral coach made of bones carrying a woman long-ago accused of murdering her husband--and of a hound with a single glowing eye. Returning to the scene of one of his most celebrated cases, The Hound of the Baskervilles, Holmes and Russell investigate a mystery darker and more unforgiving than the moors themselves, in Laurie R. King's The Moor.

Praise For The Moor: A Novel of Suspense Featuring Mary Russell and Sherlock Holmes (A Mary Russell Mystery #4)…

“Erudite, fascinating . . . the most successful re-creation of the famous inhabitant of 221B Baker Street ever attempted.” —The Houston Chronicle

“There's no resisting the appeal of Laurie R. King's thrillingly moody scenes of Dartmoor and her lovely evocations of its legends.” —The New York Times Book Review

“Dazzling may be the word to describe King's latest Mary Russell-Sherlock Holmes adventure. . . . Add King's devilishly clever plot and eccentric characters, her ability to achieve a perfect balance between serious mystery and lighthearted humor, and the charm with which she develops the captivating relationship between Holmes and Russell, and the result is a superbly rich read that would please Doyle himself.” —Booklist

“Mary's description of how she thinks through all the elements of a mystery--so deep in thought as if she were in a trance---is excellent.” —Salon.com