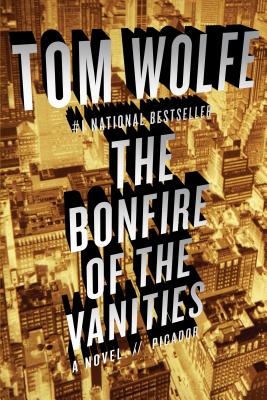 The Bonfire of the Vanities

Vintage Tom Wolfe, The Bonfire of the Vanities, the #1 bestseller that will forever define late-twentieth-century New York style.

Sherman McCoy, the central figure of Tom Wolfe's first novel, is a young investment banker with a fourteen-room apartment in Manhattan. When he is involved in a freak accident in the Bronx, prosecutors, politicians, the press, the police, the clergy, and assorted hustlers high and low close in on him, licking their chops and giving us a gargantuan helping of the human comedy, of New York in the 1980s, a city boiling over with racial and ethnic hostilities and burning with the itch to Grab It Now.

Wolfe's novel is a big, panoramic story of the metropolis that reinforces the author's reputation as the foremost chronicler of the way we live in America.


Praise For The Bonfire of the Vanities: A Novel…

“A big, bitter, funny, craftily plotted book that grabs you by the lapels and won't let you go.” —The New York Times Book Review

“The Bonfire of the Vanities chronicles the collapse of a Wall Street bond trader, and examines a world in which fortunes are made and lost at the blink of a computer screen. . . . Wolfe's subject couldn't be more topical: New Yorkers' relentless pursuit and flaunting of wealth, and the fury it evokes in the have-nots.” —USA Today

“A superb human comedy and the first novel ever to get contemporary New York, in all its arrogance and shame and heterogeneity and insularity, exactly right.” —The Washington Post Book World

Tom Wolfe (1930-2018) was one of the founders of the New Journalism movement and the author of contemporary classics like The Electric Kool-Aid Acid Test, The Right Stuff, and Radical Chic & Mau-Mauing the Flak Catchers, as well as the novels The Bonfire of the Vanities, A Man in Full, and I Am Charlotte Simmons. As a reporter, he wrote articles for The Washington Post, the New York Herald Tribune, Esquire, and New York magazine, and is credited with coining the term, “The Me Decade.” Among his many honors, Tom was awarded the National Book Award, the John Dos Passos Award, the Washington Irving Medal for Literary Excellence, the National Humanities Medal, and National Book Foundation Medal for Distinguished Contribution to American Letters. He lived in New York City.
Loading...
or support indie stores by buying on