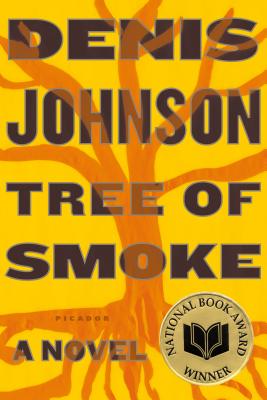 "The God I want to believe in has a voice and a sense of humor like Denis Johnson's.” —Jonathan Franzen

Tree of Smoke is the story of William "Skip" Sands, CIA--engaged in Psychological Operations against the Vietcong--and the disasters that befall him. It is also the story of the Houston brothers, Bill and James, young men who drift out of the Arizona desert and into a war where the line between disinformation and delusion has blurred away. In the words of Michiko Kakutani in The New York Times, Tree of Smoke is "bound to become one of the classic works of literature produced by that tragic and uncannily familiar war."


Praise For Tree of Smoke: A Novel…

“Denis Johnson is a true American artist, and Tree of Smoke is a tremendous book.” —The New York Times Book Review

“I can't be sure that there's been a better American novel published in the past ten years. It is a masterpiece.” —The Miami Herald

“It will . . . get inside your head like the war it is describing--mystifying, horrifying, mesmerizing. [Johnson] has written a book that by the end wraps around you as tightly as a snake.” —The Washington Post Book World

“Tree of Smoke is a masterpiece of language and depth.” —San Francisco Chronicle

“Johnson has captured the zeitgeist of American experience as surely as Twain, Hemingway, or Ellison.” —New York Post

“Opens a window onto a world of mystery, war, and intrigue whose importance in the (usually) unwritten history of our republic can't be denied.” —Chicago Tribune

“Johnson has written his War and Peace.” —Harper's Magazine