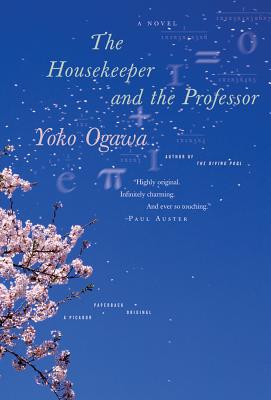 Yoko Ogawa's The Housekeeper and the Professor is an enchanting story about what it means to live in the present, and about the curious equations that can create a family.

He is a brilliant math Professor with a peculiar problem—ever since a traumatic head injury, he has lived with only eighty minutes of short-term memory.

She is an astute young Housekeeper—with a ten-year-old son—who is hired to care for the Professor.
And every morning, as the Professor and the Housekeeper are introduced to each other anew, a strange and beautiful relationship blossoms between them. Though he cannot hold memories for long (his brain is like a tape that begins to erase itself every eighty minutes), the Professor's mind is still alive with elegant equations from the past. And the numbers, in all of their articulate order, reveal a sheltering and poetic world to both the Housekeeper and her young son. The Professor is capable of discovering connections between the simplest of quantities—like the Housekeeper's shoe size—and the universe at large, drawing their lives ever closer and more profoundly together, even as his memory slips away.


Praise For The Housekeeper and the Professor: A Novel…

“Highly original. Infinitely charming. And ever so touching.” —Paul Auster

“Gorgeous, cinematic . . . The Housekeeper and the Professor is a perfectly sustained novel . . . like a note prolonged, a fermata, a pause enabling us to peer intently into the lives of its characters. . . . This novel has all the charm and restraint of any by Ishiguro or Kenzaburo Oe and the whimsy of Murakami. The three lives connect like the vertices of a triangle.” —Susan Salter Reynolds, Los Angeles Times

“Deceptively elegant . . . This is one of those books written in such lucid, unpretentious language that reading it is like looking into a deep pool of clear water. But even in the clearest waters can lurk currents you don't see until you are in them. Dive into Yoko Ogawa's world . . . and you find yourself tugged by forces more felt than seen.” —Dennis Overbye, The New York Times Book Review

“Alive with mysteries both mathematical and personal, The Housekeeper and the Professor has the pared-down elegance of an equation.” —O, The Oprah Magazine

“This sweetly melancholy novel adheres to the Japanese aesthetic that finds beauty in what is off-center, imperfect. . . . In treating one another with such warm concern and respect, the characters implicitly tell us something about the unforgiving society on the other side of the professor's cottage door. The Housekeeper and the Professor is a wisp of a book, but an affecting one.” —Amanda Heller, The Boston Globe

“The Housekeeper and the Professor is strangely charming, flecked with enough wit and mystery to keep us engaged throughout. This is Ogawa's first novel to be translated into English, and Stephen Snyder has done an exceptionally elegant job.” —Ron Charles, The Washington Post

“Lovely . . . Ogawa's plot twists, her narrative pacing, her use of numbers to give meaning and mystery to life are as elegant in their way as the math principles the professor cites. . . . Ogawa's short novel is itself an equation concerning the intricate and intimate way we connect with others--and the lace of memory they sometimes leave us.” —Anthony Bukoski, Minneapolis Star Tribune

“Exquisite… An extraordinary situation that allows the author to mine the ordinary. It's a wedge driven deep into life, and we look with astonishment at what it is able to expose.” —Stefan Kiesby, Los Angeles Review of Books

“[A] mysterious, suspenseful, and radiant fable . . . The smart and resourceful housekeeper, the single mother of a baseball-crazy 10-year-old boy the Professor adores, falls under the spell of the beautiful mathematical phenomena the Professor elucidates, as will the reader, and the three create an indivisible formula for love.” —Donna Seaman, Booklist

“Ogawa's charming fable presents a stark contrast to the creepy novellas collected last year in The Diving Pool, but her strength as an engaging writer remains.” —Vikas Turahkia, The Plain Dealer (Cleveland)

“Ogawa weaves a poignant tale of beauty, heart and sorrow in her exquisite new novel. . . . In this gorgeous tale, Ogawa lifts the window shade to allow readers to observe the characters for a short while, then closes the shade. [Translator Stephen] Snyder . . . brings a delicate and precise hand to the translation.” —Publishers Weekly (starred review)

“Ogawa's disarming exploration of an eccentric relationship reads like a fable, one that deftly balances whimsy with heartache.” —Kirkus Reviews

The characters in The Housekeeper and the Professor are nameless (“Root” is only a nickname). What does it mean when an author chooses not to name the people in her book? How does that change your relationship to them as a reader? Are names that important?

Imagine you are writer, developing a character with only eighty minutes of short-term memory. How would you manage the very specific terms of that character (e.g. his job, his friendships, how he takes care of himself)? Discuss some of the creative ways in which Yoko Ogawa imagines her memory-impaired Professor, from the notes pinned to his suit to the sadness he feels every morning.

3. As Root and the Housekeeper grow and move forward in their lives, the Professor stays in one place (in fact he is deteriorating, moving backwards). And yet, the bond among the three of them grows strong. How is it possible for this seemingly one-sided relationship to thrive? What does Ogawa seem to be saying about memory and the very foundations of our profoundest relationships?

The Professor tells the Housekeeper: “Math has proven the existence of God because it is absolute and without contradiction; but the devil must exist as well, because we cannot prove it.” Does this paradox apply to anything else, beside math? Perhaps memory? Love?

The Houskeeper’s father abandoned her mother before she was born; and then the Housekeeper herself suffered the same fate when pregnant with Root. In a book where all of the families are broken (including the Professor’s), what do you think Ogawa is saying about how families are composed? Do we all, in fact, have a fundamental desire to be a part of a family? Does it matter whom it’s made of?

Did your opinion of the Professor change when you realized the nature of his relationship with his sister-in-law? Did you detect any romantic tension between the Professor and the Housekeeper, or was their relationship chaste? Perhaps Ogawa was intending ambiguity in that regard?

The sum of all numbers between one and ten is not difficult to figure out, but the Professor insists that Root find the answer in a particular way. Ultimately Root and the Housekeeper come to the answer together. Is there a thematic importance to their method of solving the problem? Generally, how does Ogawa use math to illustrate a whole worldview?

Baseball is a game full of statistics, and therefore numbers. Discuss the very different ways in which Root and the Professor love the game.

How does Ogawa depict the culture of contemporary Japan in The Housekeeper and the Professor? In what ways does is it seem different from western culture? For example, consider the Housekeeper’s pregnancy and her attitude toward single motherhood; or perhaps look at the simple details of the story, like Root’s birthday cake. In what ways are the cultures similar, different?

Ogawa chooses to write about actual math problems, rather than to write about math in the abstract. In a sense, she invites the reader to learn math along with the characters. Why do you think she wrote the book this way? Perhaps to heighten your sympathy for the characters?

Do numbers bear any significance on the structure of this book? Consider the fact that the book has eleven chapters. Are all things quantifiable, and all numbers fraught with poetic possibility?