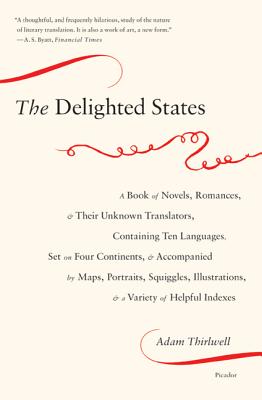 Having slept with a prostitute in Egypt, Gustave Flaubert begins his first novel, "Madame Bovary," which influences the minor French novelist Edouard Dujardin, whose novel is read by James Joyce, whose own novel "Ulysses "will move the Italian novelist Italo Sveno, and later Gertrude Stein, in radical ways. This carousel of influence shows how we devour novels in translation, while often believing that style does not translate. But the history of the novel is the history of style. "The Delighted States "attempts to solve this conundrum while mapping an imaginary country, a country of readers: "The Delighted States." As a companion, this book comes with a new translation into English of Vladimir Nabokov's "Mademoiselle O.

"A thoughtful, and frequently hilarious, study of the nature of literary translation.  It is also a work of art, a new form."--A. S. Byatt, Financial Times "The Delighted States truly raises questions that are vital to novelists and their readers; it will be hard for anyone with an interest in the subject to keep from defiling the margins with notes."--The Wall Street Journal "Thirlwell is a talented young literary Brit. . . . He has distilled the wisdom from what amounts to a lifetime of reading onto his pages. . . . His animated commentary belongs on a shelf all its own."--The Boston Globe "A prodigy, and, as such, unstoppable . . . a treasure."--The New York Times

ADAM THIRLWELL's first novel, Politics, was translated into thirty languages. In 2003, he appeared on Granta's list of the Best British Novelists under forty.
Loading...
or
Not Currently Available for Direct Purchase