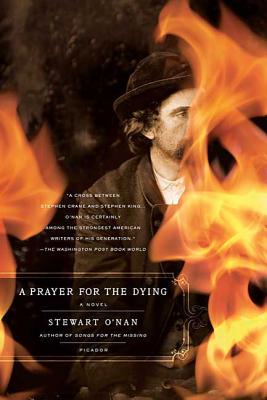 A Prayer for the Dying

“A Prayer for the Dying reads like the amazing, unrelenting love child of Shirley Jackson and Cormac McCarthy. It’s twisted proof that God will do worse to test a faithful man than the devil would ever do to punish a sinner.” —Chuck Palahniuk

Set in Friendship, Wisconsin, just after the Civil War, A Prayer for the Dying tells of a horrible epidemic that is suddenly and gruesomely killing the town's residents and setting off a terrifying paranoia. Jacob Hansen, Friendship's sheriff, undertaker, and pastor, is soon overwhelmed by the fear and anguish around him, and his sanity begins to fray. Dark, poetic, and chilling, Stewart O'Nan's A Prayer for the Dying examines the effect of madness and violence on the morality of a once-decent man.


Praise For A Prayer for the Dying: A Novel…

“A cross between Stephen Crane and Stephen King . . . O'Nan is certainly among the strongest Americanwriters of his generation.” —Peter McCarthy, The Washington Post Book World

“A fine, terse novel about the circumstantial nature of evil and the terrible fragility of man.” —Patrick McGrath, The New York Times Book Review

“Will make readers shudder and think and marvel at a writer's creation of an alien world that seems so real.” —Bob Minzesheimer, USA Today