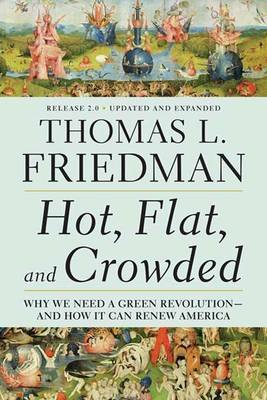 In this brilliant, essential book, Pulitzer Prize-winning author Thomas L. Friedman speaks to America's urgent need for national renewal and explains how a green revolution can bring about both a sustainable environment and a sustainable America.

Friedman explains how global warming, rapidly growing populations, and the expansion of the world's middle class through globalization have produced a dangerously unstable planet--one that is "hot, flat, and crowded." In this Release 2.0 edition, he also shows how the very habits that led us to ravage the natural world led to the meltdown of the financial markets and the Great Recession. The challenge of a sustainable way of life presents the United States with an opportunity not only to rebuild its economy, but to lead the world in radically innovating toward cleaner energy. And it could inspire Americans to something we haven't seen in a long time--nation-building in America--by summoning the intelligence, creativity, and concern for the common good that are our greatest national resources.

Hot, Flat, and Crowded 2.0 is classic Thomas L. Friedman: fearless, incisive, forward-looking, and rich in surprising common sense about the challenge--and the promise--of the future.


Praise For Hot, Flat, and Crowded 2.0: Why We Need a Green Revolution--and How It Can Renew America…

“Friedman produces cogent analyses of the most important developments of our time. . . . A convincing case for the green revolution required to rescue us from an unsustainable course.” —USA Today

“Friedman has made himself a major interpreter of the confusing world we inhabit. . . . He gets the big issues right.” —The Washington Post Book World

“A compelling manifesto that deserves a wide reading, especially by members of Congress.” —The Boston Globe

“If Friedman's profile and verve take his message where it needs to be heard, into the boardrooms of America and beyond, that can only be good--for all our sakes.” —The New York Times Book Review

“Tom Friedman has done it again. . . . He has lit upon what he might describe as another Big Idea, and, given his track record as a zeitgeist thermometer, we should all pay attention. . . . He has a gift for weaving anecdotes and examples from around the world into his broader tapestry.” —Financial Times

“Hot, Flat, and Crowded may make it official, for many, that ecology-mindedness is the character of our times. . . . I hope everyone reads it.” —The Philadelphia Inquirer