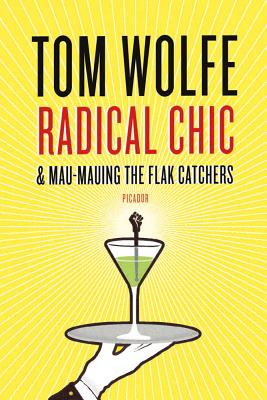 Radical Chic & Mau-Mauing the Flak Catchers is classic Wolfe, a funny, irreverent, and "delicious" (The Wall Street Journal) dissection of class and status by the master of New Journalism

"On the night of January 4, 1970, Maestro and Mrs. Leonard Bernstein threw a bash in their thirteen-room park Avenue pad to raise money for the Black Panthers Defense Fund. New York society will probably never play Lady Bountiful in quite the same way again, because among the Beautiful People present was Tom Wolfe, pop sociologist and parajournalist supreme."--Book World


Praise For Radical Chic and Mau-Mauing the Flak Catchers…

“Wolfe's genius is that he is fair; he puts the Bernstein part in perspective against the background of New York social history. Read it and weep with laughter.” —Houston Post

“A sociological classic . . . At Wolfe's hands the socialites get a roasting they will long remember.” —Saturday Review

“Tom Wolfe understands the human animal like no sociologist around. He tweaks his reader's every buried though and prejudice. He sees through everything. He is as original and outrageous as ever.” —The New York Times

“Uproariously funny and socially perceptive . . . a penetrating dissection of the confusion among the classes and the search for status.” —Women's Wear Daily

“Tom Wolfe at his most clever, amusing, and irreverent.” —San Franciscio Chronicle

“Absolutely brilliant. One of the finest examples of reporting and social commentary I have read anywhere.” —Gay Talese