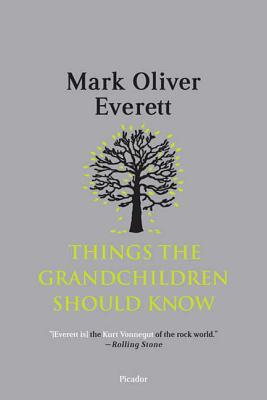 Things the Grandchildren Should Know

How does one young man survive the deaths of his entire family and manage to make something of his life? The insecure son of a misunderstood genius of quantum mechanics, Mark Oliver Everett's upbringing was "ridiculous, sometimes tragic, and always unstead." But somehow he survived this and ensuing tragedies, channeling his experiences into his critically acclaimed music with the Eels. Told with surprising candor, his memoir is an inspiring and remarkable story, full of hope, humor, and wry wisdom.


Praise For Things the Grandchildren Should Know…

“Everett is the Kurt Vonnegut of the rock world.” —Rolling Stone

“One of the best books ever written by a contemporary artist.” —Pete Townshend

“It is, like the music of Eels, intellectual, wry and unflinching as it conveys complex emotions with simple, graceful language.” —Los Angeles Times

“Everett captures the drama of a suburban Virginia family bedeviled by illness, early death, and madness, and illustrates how such adversities shaped his striking music gifts--and now this pitch-perfect memoir.” —Elle

Mark Oliver Everett is the lead singer, guitarist, and keyboardist of indie rock band The Eels. Rolling Stone magazine called Everett "the Kurt Vonnegut of the rock world." The author is the son of physicist Hugh Everett III, originator of the "Many Worlds" theory of quantum physics. While coping with the deaths of every member of his immediate family, Everett turned tragedy into the impetus for recording such acclaimed albums Electro-Shock Blues and Blinking Lights and Other Revelations.
Loading...
or support indie stores by buying on