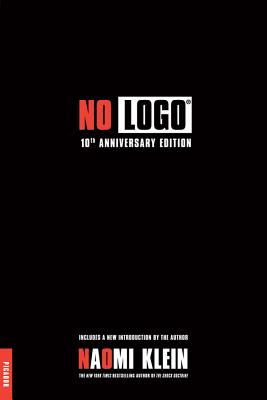 No Space, No Choice, No Jobs

NO LOGO was an international bestseller and "a movement bible" (The New York Times). Naomi Klein's second book, The Shock Doctrine, was hailed as a "master narrative of our time," and has over a million copies in print worldwide.

In the last decade, No Logo has become an international phenomenon and a cultural manifesto for the critics of unfettered capitalism worldwide. As America faces a second economic depression, Klein's analysis of our corporate and branded world is as timely and powerful as ever.

Equal parts cultural analysis, political manifesto, mall-rat memoir, and journalistic exposé, No Logo is the first book to put the new resistance into pop-historical and clear economic perspective. Naomi Klein tells a story of rebellion and self-determination in the face of our new branded world.


Praise For No Logo: No Space, No Choice, No Jobs…

“No Logo has been a pedagogical godsend. I used it to illustrate contemporary applications of complex cultural theories in an introductory social science sequence. It worked so beautifully, word about the book spread across campus, and other students were begging to read it in their sections of the course.” —Bruce Novak, Division of Social Sciences, The University of Chicago

“A complete, user-friendly handbook on the negative effects that 1990s überbrand marketing has had on culture, work, and consumer choice.” —The Village Voice

“The Das Kapital of the growing anti-corporate movement.” —The London Observer

“Klein is a sharp cultural critic and a flawless storyteller. Her analysis is thorough and thoroughly engaging.” —Newsweek.com

“No Logo is an attractive sprawl of a book describing a vast confederacy of activist groups with a common interest in reining in the power of lawyering, marketing, and advertising to manipulate our desires.” —The Boston Globe

Naomi Klein is the award-winning author of the acclaimed international bestsellers The Shock Doctrine, No Logo, This Changes Everything, and No Is Not Enough. She is a contributing editor for Harper’s, a reporter for Rolling Stone, and writes a regular, internationally syndicated column. She has won the James Aronson Award for Social Justice Journalism. In September 2018, she was named the inaugural Gloria Steinem Chair for Media, Culture and Feminist Studies at Rutgers University.
Loading...
or support indie stores by buying on