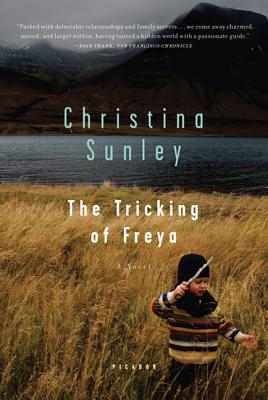 The Tricking of Freya

A young woman obsessed with uncovering a family secret is drawn into the strange and magical landscape, language, and history of Iceland.

Freya Morris is living in New York, far removed from her family and her past, when she is summoned back to the formative place of her youth, a remote Canadian village called Gimli, where her Icelandic ancestors settled long ago. Her ancient grandmother, a woman who knows all the family stories, now clings to life. In Gimli, Freya picks up the thread of a secret--one that leads her through her history and ultimately back to Iceland. Along the way, we learn the story of her early visits to Gimli, the truth about her exuberant, mercurial aunt, and the full scope of a tragedy that shattered her childhood in an instant.

A vivid, moving story of an immigrant family and the culture of a little-known nation, The Tricking of Freya is "astonishingly accomplished . . . a bewitching tale of volcanic emotions, cultural inheritance, family sorrows, mental illness, and life-altering discoveries" (Donna Seaman, Booklist).


Praise For The Tricking of Freya: A Novel…

“Packed with delectable relationships and family secrets . . . We come away charmed, moved, and larger within, having toured a hidden world with a passionate guide.” —Joan Frank, San Francisco Chronicle

“Sparkles with the author's love of language and of her own Icelandic culture. The book's masterfully told final mysteries reveal themselves as magically as darkroom images appearing under the light.” —More magazine

“An impressive debut . . . This novel works on several levels: as a drama of family dynamics; as an immigrant story; and as a showcase for the author's broad and deep knowledge of Iceland.” —Mary Ann Gwinn, The Seattle Times

“An excellent debut . . . If all you know about Iceland is failed banks and Bjork, this is a highly readable introduction.” —Yvonne Zipp, The Christian Science Monitor

“[An] amazing debut...Like the famed poet within, Sunley's writing is truly poetic. She brings here settings alive in a way that will make you believe that you have been there and experienced it all yourself.” —BookBitch.com

“Epic... Sunley's research shines through in a story in which the landscape of Iceland is as much a character as Freya, making this an exceptional and unique coming-of-age novel. ” —Washington State Journal

Christina Sunley grew up hearing stories about her Icelandic grandparents and the massive emigration that followed a 19th century volcanic eruption. She visited Iceland for extended stays to research and write her novel The Tricking of Freya. Her short fiction has appeared in literary journals, and she has taught memoir writing and fiction at universities. She lives in the San Francisco Bay area.