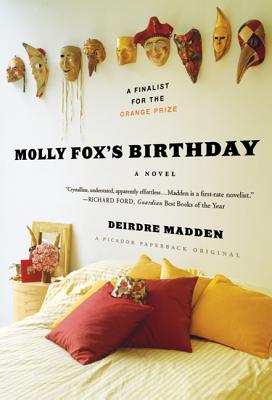 A Finalist for the Orange Prize


It is the height of summer, and celebrated actor Molly Fox has loaned her house in Dublin to a friend while she is away performing in New York. Alone among all of Molly's possessions, struggling to finish her latest play, she looks back on the many years and many phases of her friendship with Molly and their college friend Andrew, and comes to wonder whether they really knew each other at all. She revisits the intense closeness of their early days, the transformations they each made in the name of success and security, the lies they told each other, and betrayals they never acknowledged. Set over a single midsummer's day, Molly Fox's Birthday is a mischievous, insightful novel about a turning point--a moment when past and future suddenly appear in a new light.

“Deirdre Madden's prose is crystalline, understated, apparently effortless yet artfully suitable. She really does not remind me of anybody I've read before. And yet, like other formidable writers--Mavis Gallant, Margaret Atwood and Elizabeth Bowen come to mind--she is after something intrinsic and riddling but essential in us all, something that probably doesn't exist until we've read every word this book contains. It is ambitious work. Madden is a first-rate novelist.” —Richard Ford

“A novel of great subtlety, beauty and strength. Madden is one of our finest writers.” —Anne Enright

“It is almost impossible not to be moved.” —The Scotsman

“Equipped with an almost celestial compassion. Madden is the constant genius of Irish Letters.” —Sebastian Barry

“Written with skill, sympathy, and flair, establishes Madden further as one of the most important Irish novelists.” —Colm Toibin, Best Books of the Year, Sunday Business Post (Ireland)

“Resembles a box in which keepsakes have been carefully packed away: over the course of a day, the significant memories of three lives are taken out and examined, giving rise to a satisfying tension between the deceptive simplicity of the setup and the subtle impacts of each successive 'reveal'. . . .[an] elegant novel of contained power.” —The Guardian (UK)

“This is a novel about identity and it poses meaningful questions about the presentation of self and perhaps, the necessity of falsehood. . . . Zestful and lyrical writing.” —Penny Perrick, The Times (London)

Deirdre Madden teaches at Trinity College Dublin and is a member of the Irish arts academy Aosdána. She is the author of the novel Molly Fox's Birthday.

1. How do the narrator’s feelings about Molly change over the course of the novel? Do you think the she sees Molly clearly at the end?

2. “One of the strange things about really old friendships,” the narrator says, “is that the past is both important and not important.” (p. 32) How important is the past to Molly, Andrew and the narrator? How does each of them relate to their pasts and the places they came from?

3. The novel takes place over a single day. How does the author use this short time span to reveal the texture of the characters’ relationships and histories?

4. “I have always believed that I know who I am,” the narrator says (p. 58), “no small thing in the shifting dream that is contemporary life.” How well do you think the narrator really understands herself? Do you agree that it’s harder for people to understand themselves now, in “contemporary life”, than it was in earlier generations?

5. Several characters in the novel note a connection between methods of theater and those of religion. What do you think they mean? Do you agree?

6. Look at Molly’s description of the moment she realizes she wants to be an actor (p. 71-72). Is it a contradiction that she answered the question “Who am I?” by realizing that she wanted be other people for a living? Do you think Molly is an honest person?

7. The narrator describes David as a happy man, as opposed to someone, like Molly, “whose whole life was an effort to understand this failure to connect.” What does this comparison between David and Molly say about how the narrator views Molly’s talents?

8. Each of the three main characters in the story has a very important relationship with one of their siblings: Molly has Fergus, Andrew has Billy, and the narrator has Tom. Do you see any similarities between the three relationships? How do these siblings represent the worlds that the main characters have left behind?

9. As Andrew is leaving at the end of the book the narrator has a very acute memory of the night they spent together. What are her real feelings for him? Did you see any evidence of these feelings earlier in the story? Why do you think she never told Molly about the night she spent with Andrew?

10. “Is the self really such a fluid thing,” the narrator asks, “something we invent as we go along, almost as a social reflex?” How does this idea play out for the three main characters in the story? Do you think the self is a fluid, ever-changing thing, or does each person have a core self that remains constant?

11. What can you learn about Molly Fox through the way she’s decorated her home? How do the narrator’s observations of Molly’s house change the way she sees her?

12. What do you think is the significance of the dream that opens the book, and which the narrator remembers at several points throughout the day?