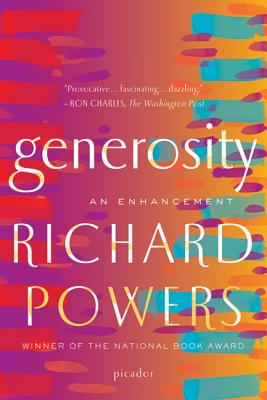 “From laugh-out-loud whimsy to reeling philosophical depth, Generosity tells the story of an unusually contented young woman and the people who wish to possess her, or at least her DNA, to create the world's first happiness gene. I read this stunning book with such rapt attention and awe that when I finished it I wanted to start again. Generosity is both exquisitely timely and for the ages.”
— Sheryl Cotleur, Book Passage, Corte Madera, CA
View the List

The National Book Award-winning author of The Echo Maker proves yet again that "no writer of our time dreams on a grander scale or more knowingly captures the zeitgeist." (The Dallas Morning News).

What will happen to life when science identifies the genetic basis of happiness? Who will own the patent? Do we dare revise our own temperaments? Funny, fast, and magical, Generosity celebrates both science and the freed imagination. In his most exuberant book yet, Richard Powers asks us to consider the big questions facing humankind as we begin to rewrite our own existence.


Praise For Generosity: An Enhancement…

“An excellent introduction to Powers's work, a lighter, leaner treatment of his favorite themes and techniques...An engaging story-teller...even as he questions the conventions of narrative and character, Generosity gains in momentum and suspense.”—Jay McInerney, The New York Times Book Review

“Powers is a brilliantly imaginative writer, working here with a lightness of touch, a crisp sense of peace, and a distinct warmth...Powers shows both his reach as a student of humanity and his mastery as a storyteller.”—O, The Oprah Magazine

“When written by Dostoevsky, Dickens, or Richard Powers at his best, one may feel that [the novel] can contain every facet of the world.”—Michael Dirda, The New York Review of Books

“One of our most exciting contemporary novelists.”—Amanda Gefter, Philadelphia Inquirer

"Powers is better than the best of almost anybody else."—John Leonard, Harper's Magazine

"Powers may well be one of the smartest novelists now writing."—Los Angeles Times

"One of our greatest novelists."—Booklist

"[Powers's] characters are unforgettable, flesh-and-blood individuals as finely drawn as those of any contemporary fiction writer."—Steve Weinberg, The Seattle Times

"To read his work is to be wowed by his verbal muscularity...admirable...wonderfully original."—Meg Wolitzer, The New York Times Book Review