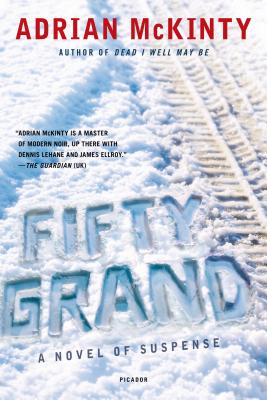 Detective Mercado of the Havana Police department is devastated when she learns that her father's been killed in a mysterious hit and run accident - in Fairview, an affluent little mountain town in Colorado, of all places. So she reluctantly does what any good daughter would: smuggles herself out of Cuba and goes to Fairview, where she's got seven days to find her father's killer, exact revenge, and return home before the Cuban authorities catch on. But in a town teeming with vacationing celebrities, Mexican indentured servants, drug dealers, and a sadistic local sheriff's minions, she'll have to comb through a long cast of suspects to find the man responsible for her father's death. Adrian McKinty's "Fifty Grand "is an explosive tale of retribution.


Praise For Fifty Grand: A Novel of Suspense…

“Adrian McKinty [is] a master of modern noir, up there with Dennis Lehane and James Ellroy….”—The Guardian (UK)

“He is a cross between Mickey Spillane and Damon Runyon—the toughest, the best. Beware of McKinty.”—Frank McCourt

“I've rarely read a novel that had it all—human and drug trafficking, Hollywood excesses, ferocious vengeance—but what I found most compulsive was the wondrous compassion of the book. It moved me in ways I never anticipated.”—Ken Bruen, author of The Guards and Once Were Cops

Adrian McKinty is the author of "Dead I Well May Be, The Dead Yard, "and "The Bloomsday Dead." He lives in Melbourne, Australia.
Loading...
or
Not Currently Available for Direct Purchase