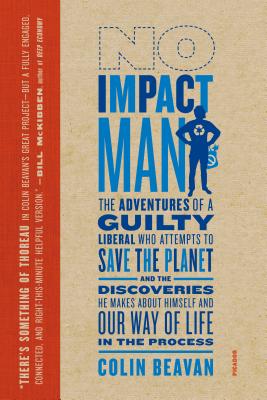 What does it really take to live eco-effectively? For one year, Colin Beavan swore off plastic and toxins, turned off his electricity, went organic, became a bicycle nut, and tried to save the planet from environmental catastrophe while dragging his young daughter and his Prada-wearing wife along for the ride. Together they attempted to make zero impact on the environment while living right in the heart of Manhattan, and this is the sensational, funny, and consciousness-raising story of how they did it. With No Impact Man, Beavan found that no-impact living is worthwhile--and richer, fuller, and more satisfying in the bargain.

“Far from being a movement of self-denial and stern lectures about having too much fun, the 'no impact' mind-set is actually about increasing fulfillment and happiness by asking us to think about what makes us truly happy and what's really important in our lives.” —Arianna Huffington

“Profound . . . Beavan's project has significant emotional and ecological heft. No Impact Man works, most of all, because Beavan is intelligent, funny, provocative, and, above all, honest.” —The Philadelphia Inquirer

“You have to give Colin Beavan credit; the man put his money where his mouth is. A self-proclaimed 'guilty liberal' tired of the world's general ecological decline, he decided to change his life. And in no small way. Even better, he did it with a sense of humor.” —The Boston Globe

“Colin Beavan has the disarming and uniquely remedial ability to make you laugh while he's making you feel like a swine, and what's more, to make you not only want to, but to actually do something, about it." --Norah Vincent, author of Voluntary Madness"No Impact Man is a subversive book--not because it preaches a radical environmental agenda, but because it gives the secret to personal rebellion against the bitterness of a man's own compromises.” —Arthur Brooks, author of Gross National Happiness

Colin Beavan is the author of No Impact Man as well as two previous books that have absolutely nothing to do with the environment: Fingerprints: The Murder Case That Launched Forensic Science and Operation Jedburgh: D-Day and America’s First Shadow War. His writing has appeared in Esquire, The Atlantic, and the New York Times, and he posts regularly at No Impact Man. He lives in New York City.
Loading...
or
Not Currently Available for Direct Purchase