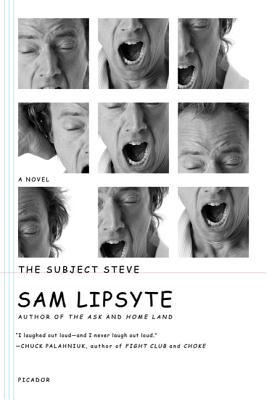 Meet Steve (not his real name), a Special Case, in truth a Terminal Case, and the eponymous antihero of Sam Lipsyte's first novel. Steve has been informed by two doctors that he is dying of a condition of unquestioned fatality, with no discernible physical cause. Eager for fame, and to brand the new plague, they dub it Goldfarb-Blackstone Preparatory Extinction Syndrome, or PREXIS for short. Turns out, though, Steve's just dying of boredom. The Subject Steve is a dazzling debut—by turns manic, ebullient, and exquisitely deadpan—Sam Lipsyte is in company with the master American satirists.


Praise For The Subject Steve: A Novel…

“I laughed out loud--and I never laugh out loud.” —Chuck Palahniuk, author of Fight Club and Choke

“Lipsyte is a gifted stylist, precise, original, devious, and very funny. In a time when the language of most novels is dead on arrival, this book, about a dying man, is startlingly alive.” —Jeffrey Eugenides, author of Middlesex

“Falls somewhere between Chuck Palahniuk and George Saunders. Let's throw Vonnegut in there as an influence too. And Pynchon...This is Satire with a capital S....An enormously likable first novel. ” —Esquire

“A spot-on DeLillo-like excavation of our consuming consumer culture, and the ultimate fear---the fear of death---that lurks behind it. ” —San Francisco Chronicle

Sam Lipsyte was born in 1968. He is the author of the story collections Venus Drive (named one of the top twenty-five books of its year by the Voice Literary Supplement) and The Fun Parts and three novels: The Ask, The Subject Steve and Home Land, which was a New York Times Notable Book and received the first annual Believer Book Award. He is also the recipient of a Guggenheim fellowship. He lives in New York City and teaches at Columbia University.
Loading...
or support indie stores by buying on