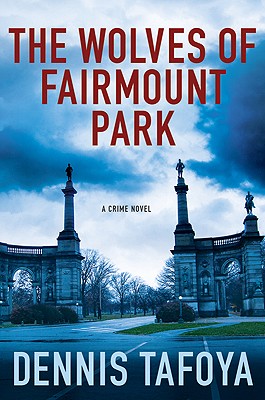 The Wolves of Fairmount Park

In The Wolves of Fairmount Park, Dennis Tafoya’s lyrical, intense, sometimes tragic and sometimes hopeful second novel, the details of a drive-by shooting of two teenagers in a rough Philadelphia neighborhood are filled in from four perspectives: Brendan Donovan, a cop and the father of the boy shot and left comatose; George Parkman Sr., another father, this one of the boy who was killed; Danny Martinez, a cop whose job it is to investigate the killing; and Orlando Donovan, the junkie uncle of the cop’s kid, who happens to live nearby.

No one knows what the two boys were doing in front of a dope house on Roxborough Avenue in the middle of the night, what business they might have had with gangs like Green Lane or the Tres Nortes. Even though they had a thousand dollars with them, they were good boys. Everyone says, “They were good boys.”

Through the fast-paced interweaving of these four distinct voices, Dennis Tafoya, author of the acclaimed Dope Thief, tells the moving story of two kids in the wrong place at the wrong time, and the lengths that the people around them will go to find the truth.

Praise For The Wolves of Fairmount Park…

Advance Praise for The Wolves of Fairmount Park

Praise for Dope Thief
“While it bears all the hallmarks of a crime novel, it is also something more, a finely nuanced character study of a criminal trying to get out of the downward spiral of his crimes. . . . Tafoya’s prose alternates between a staccato, hard-boiled cadence and a beautiful, near-florid style. . . . Over Dope Thief’s final ninety pages, Tafoya’s coda elevates his book to the extraordinary.”
---Las Vegas Weekly

“A classic story . . . First-time novelist Dennis Tafoya has a nice sense of how and where his characters live, revealing in stark detail the hardscrabble life of the petty thief.”
---Chicago Tribune

“Raw and redemptive . . . A boy ‘born into the life’ makes a wrenching attempt to change course or die trying in a first novel that marks Tafoya as a writer to watch.”
---Publishers Weekly

“Tafoya’s book starts at a sprint and hits its marks.”
---Philadelphia City Paper

“A fine first novel . . . Tafoya is off to a promising start. . . . The plotting is solid, and the action has a hard, violent edge that recalls Richard Price.”
---Booklist

DENNIS TAFOYA was born in Philadelphia and now lives in Bucks County, Pennsylvania. "The Wolves of Fairmount Park" is his second novel.
Loading...
or
Not Currently Available for Direct Purchase