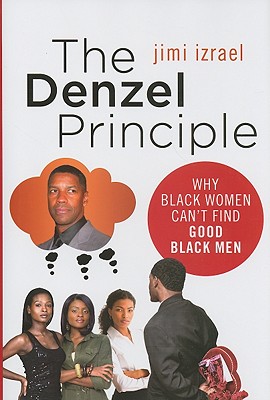 "Sisters decry the shortage of good men and say there is no way she is settling for less than a good Black man. Not just a good one, but the BEST one: Denzel Washington. She, of course, has no idea what that means, what she wants or what a good Black man truly looks like." –from The Denzel Principle

The Denzel Principle is the belief that the perfect man—in the form of Denzel Washington—actually exists off screen and that all Black women can snag a Denzel of their very own.

So what does your very own Denzel look like?  Well, he’s rich but earthy, handsome but not pretty, doting but not docile, tough but vulnerable, political but not radical, passionate but not hysterical, ambitious but not overbearing, well-read but not nerdy, manly but not macho, gentle but not feminine, Black but not militant, sexy but not solicitous, flirtatious but particular...and all that on cue and in proper measure.

Award winning reporter and cultural critic, jimi izrael offers to set the record straight – from a regular guy’s point of view. The Denzel Principle is straight talk on everything from "Ways Women Can Break the Hold of the Dizzle," "Ways to Attract Mr. Right," to "Ten Reasons to Love Ordinary Black Men" and so much more.

JIMI IZRAEL is an award-winning reporter and culture-critic from Shaker Heights, Ohio who currently moderates "The Barbershop" for National Public Radio's "Tell Me More with Michel Martin" and blogs "The Hardline" for the "Washington Post's "The Root.com. He muses often at www.jimiizrael.com.
Loading...
or
Not Currently Available for Direct Purchase