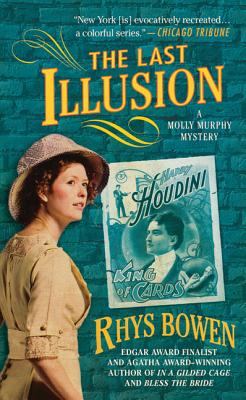 Irish immigrant and private detective Molly Murphy is thrilled to have a ticket to see world-famous illusionist Harry Houdini. But before he can even take the stage, the opening act goes horribly wrong--and the sensational Signor Scarpelli's lovely assistant is sawed in half. In the aftermath, Scarpelli accuses Houdini of tampering with his equipment. Who else but the so-called Handcuff King could have got a hold of his trunk of tricks, which he keeps under lock and key?

And it seems the maestro Scarpelli's not the only one critical of Houdini. Now that he's raised the stakes to such a perilous level, lesser acts are being put out of business. With everyone on edge, Houdini's wife hires Molly to watch his back. But how can she protect a man who literally risks his life every night? Now it's up to Molly to keep an eye on Houdini and find out whether these masters of illusion are simply up to their tricks--or if there truly is something much more treacherous going on....

“Delightful … As ever, Bowen does a splendid job of capturing the flavor of early twentieth-century New York.” —Publishers Weekly

“Molly is an indomitable creature.… The book bounces along in the hands of Ms. Bowen and her Molly, and there is no doubt that she will be back causing trouble.” —Washington Times

“Readers will surely testify that Murphy has become one of their favorite characters.… This book is a keeper.” —Tampa Tribune

“Its enjoyable charm and wit will appeal to a cross-section of mystery fans.” —Baltimore Sun