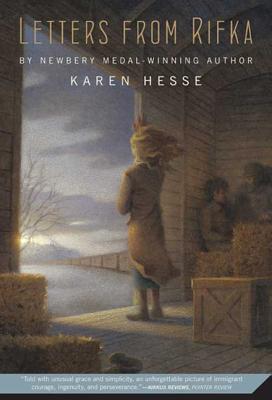 "America," the girl repeated. "What will you do there?"
I was silent for a little time.
"I will do everything there," I answered.

Rifka knows nothing about America when she flees from Russia with her family in 1919. But she dreams that in the new country she will at last be safe from the Russian soldiers and their harsh treatment of the Jews. Throughout her journey, Rifka carries with her a cherished volume of poetry by Alexander Pushkin. In it, she records her observations and experiences in the form of letters to Tovah, the beloved cousin she has left behind.

Strong-hearted and determined, Rifka must endure a great deal: humiliating examinations by doctors and soldiers, deadly typhus, separation from all she has ever known and loved, murderous storms at sea, detainment on Ellis Island--and is if this is not enough, the loss of her glorious golden hair.

Based on a true story from the author's family, Letters from Rifka presents a real-life heroine with an uncommon courage and unsinkable spirit.


Praise For Letters from Rifka…

“What especially raises it above docu-novel is the emerging sense of Rifka's personality. Bald from the ringworm, poor and needy, she proves she's no greenhorn; she has a gift for languages, she's brave and clever, and if she talks too much, so be it.” —Booklist

“Based largely on the memories of the author's great-aunt, this historical novel has a plot, characters, and style that will make it an often-requested choice from young readers. A vivid, memorable, and involving reading experience.” —School Library Journal, Starred Review

Karen Hesse is the author of many books for young people, including Out of the Dust, winner of the Newbery Medal, Letters from Rifka, Brooklyn Bridge, Phoenix Rising, Sable and Lavender. In addition to the Newbery, she has received honors including the Scott O’Dell Historical Fiction Award, the MacArthur Fellowship “Genius” Award and the Christopher Award, and was nominated for a National Jewish Book Award. Born in Baltimore, Hesse graduated from the University of Maryland. She and her husband Randy live in Vermont.
Loading...
or support indie stores by buying on