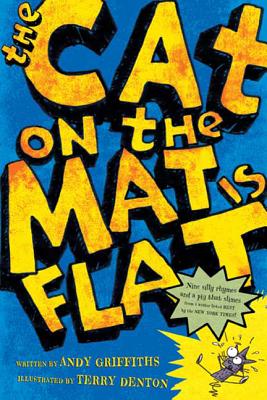 The Cat on the Mat Is Flat

Muck! Uck! Yuck!
It is just bad luck
When the truck of a duck
Gets stuck in the muck?

Wacky rhymes that won't bore!
All of this and so much more;
What are you waiting for?

With silly rhymes, sound effects, and hilarious art on every page, Andy Griffiths and illustrator Terry Denton capture slapstick physical comedy in a book so easy to read that early elementary school students can read it themselves!


Praise For The Cat on the Mat Is Flat…

â€œImagine the outcome if Dr. Seuss, Dav Pilkey, and Lane Smith were locked in a room until they came up with a book for beginning or reluctant readers. These nine rhyming stories have action galore, plenty of dialogue, and ample pen-and-ink illustrations, all wrapped up in humor. . . . Even young people who are struggling to get the hang of reading may happily handle all 176 crazy pages.â€ â€”School Library Journal

â€œTake one part Dr. Seuss, one part Edward Lear, place in a blender with a dash of Dav Pilkey and a bit of Cartoon Network juice . . . meant to be read as pure joy. It's a piece of candy eaten in secret between meals.â€ â€”The Excelsior File (blog)

â€œThis collection of stories is fun albeit with a touch of mayhem . . . This is a good book for beginning readers, in the same vein as THE CAT IN THE HAT and THE CAT IN THE HAT COMES BACK. It will likely spark a new rhyming nation of happy youngsters, some of whom will grow up to write their generation's outrageously funny advertising jingles . . . Any beginning reader will find it charmingly slapstick and fun.â€ â€”Armchair Interviews

Andy Griffiths is the New York Times bestselling author of The Day My Butt Went Psycho!, Zombie Butts from Uranus!, and Butt Wars! The Final Conflict, as well as the Treehouse Series and Killer Koalas from Outer Space. In 2007, he became the first Australian author to win six childrenâ€™s choice awards in one year for Just Shocking! He is passionate about inspiring a love of books in his young readers, and works as an ambassador for the Indigenous Literacy Project, which provides books and literacy resources to remote indigenous communities around Australia. Andy is a big fan of Dr. Seuss and of cauliflower. He lives in Melbourne, Australia, and is Australiaâ€™s most popular childrenâ€™s writer.