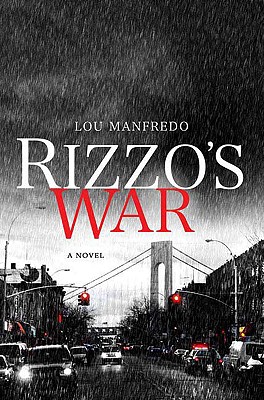 Rizzo’s War, Lou Manfredo’s stunningly authentic debut, partners a rookie detective with a seasoned veteran on his way to retirement in Bensonhurst, Brooklyn.

“There’s no wrong, there’s no right, there just is.” This is the refrain of Joe Rizzo, a decades-long veteran of the NYPD, as he passes on the knowledge of his years of experience to his ambitious new partner, Mike McQueen, over a year of riding together as detectives in the Sixty-second Precinct in Bensonhurst, Brooklyn. McQueen is fresh from the beat in Manhattan, and Bensonhurst might as well be China for how different it is. They work on several cases, some big, some small, but the lesson is always the same. Whether it’s a simple robbery or an attempted assault, Rizzo’s saying always seems to bear out.

When the two detectives are given the delicate task of finding and returning the runaway daughter of a city councilman, who may or may not be more interested in something his daughter has taken with her than in her safety, the situation is much more complex. By the end of Rizzo and McQueen’s year together, however, McQueen is not surprised to discover that even in those more complicated cases, Rizzo is still right—there’s no wrong, there’s no right, there just is.

Rizzo’s War is an introduction to a wonderful new voice in crime fiction in the Big Apple, ringing with authenticity, full of personality, and taut with the suspense of real, everyday life in the big city.

“Lou Manfredo gets it. As a depiction of the Byzantine, politicized existence of a working American police department, Rizzo’s War stands as a valuable primer. This is good police work as it actually occurs—full of flaw and compromise, absent the pristine science of television procedurals, and bearing only a vague resemblance to what any social or legal philosopher might define as justice. With all of that said, though, sometimes good police work is nearly enough.”
—David Simon, creator of The Wire


“I’ve read a lot of New York cop novels in my lifetime, but Lou Manfredo has managed to introduce totally original characters in Joe Rizzo and his young partner. Rizzo’s War is about story, character, and an engaging literary style that should make the author the next big one.”
—Otto Penzler, owner of The Mysterious Bookshop

"Rizzo’s War is exceptional. Most urban crime novels do not tell it like it is. They give their heroes square jaws and reduce subtle moral shadings to plainly dishonest black-and-white. But this is a bold adventure in the gray zone—in other words, the world that most of us actually live in. The people are recognizable, the talk is good, and the story is swift. Somewhere in fiction heaven, Dashiell Hammett and Jane Austen are both admiring Joe Rizzo’s undeluded pragmatism. It’s a terrific debut and Lou Manfredo is a writer to watch.”
—Peter Blauner, author of Slipping into Darkness and Slow Motion Riot

“A compelling, beautifully written debut novel. Joe Rizzo walks a morally complicated tightrope between self-protection and self-destruction, and we cannot look away. No one knows this world like Lou Manfredo. Rizzo’s War is the best police procedural I’ve read in a decade.”
—Tim McLoughlin, editor of Brooklyn Noir

Lou Manfredo served in the Brooklyn criminal justice system for twenty-five years. His short fiction has appeared in "Best American Mystery Stories," "Ellery Queen Mystery Magazine," and "Brooklyn Noir." This is his first novel. Born and raised in Brooklyn, he now lives in New Jersey with his wife.
Loading...
or
Not Currently Available for Direct Purchase