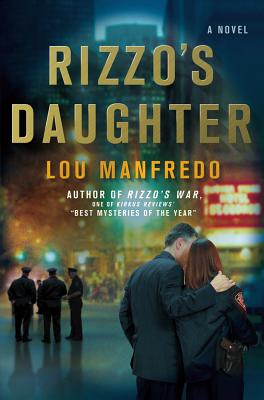 Brooklyn cop Joe Rizzo---"the most authentic cop in contemporary crime fiction" (starred review "Kirkus Reviews")---is ready to retire and spend the rest of his days with his wife, doting on their grown-up girls. But when his youngest daughter, Carol, decides to follow her dad onto the force, Joe decides to stay on until she's settled, calling in favors to get her assigned to the easiest house, the best training officer anything to protect his baby girl.

While there, of course, he's still working a few cases, though he never would've guessed that one of them would be the most sensational case of his career, the murder of mob boss Louie Quattropa. If mob wars were the worst of his problems, he could handle that, but with a daughter on patrol, Joe knows all too well what dangers await her and what little he can do about them.

With an authentic voice and breathtakingly accurate portrayal of police work, Lou Manfredo's novels have won wide acclaim, and "Rizzo's Daughter" raises the bar to a whole new level.


“He knows the pitfalls of police work, and his account is both procedural and compelling, never forgetting the psychological toll that comes with the crimes. . . . The grit of South Brooklyn is still under Manfredo’s fingernails.”
---New York Daily News


“Brooklyn criminal justice veteran Lou Manfredo sticks to his guns in this follow-up to Rizzo’s War.”
---The Star-Ledger (New Jersey)

“Gripping . . . Bar none, Joe Rizzo is the most authentic cop in contemporary crime fiction.”
---Kirkus Reviews (starred review, One of the Best Mysteries of 2011)

“Manfredo shows us the nitty-gritty of police work. . . . It’s a realistic portrait . . . a solid debut.”
---The Washington Post

Lou Manfredo, author of "Rizzo's Fire" and "Rizzo's War"," " worked in the Brooklyn criminal justice system for twenty-five years. His short fiction has appeared in "Best American Mystery Stories"," " Ellery "Queen Mystery Magazine"," " and "Brooklyn Noir." "Rizzo's Daughter" is his third novel. Born and raised in Brooklyn, he now lives in New Jersey with his wife.
Loading...
or
Not Currently Available for Direct Purchase