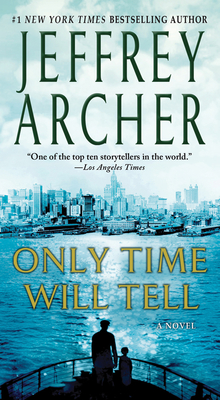 This introductory novel in Archer's engrossing series The Clifton Chronicles includes a cast of colorful characters and takes us from the ravages of the Great War to the outbreak of the Second World War, when Harry must decide whether to take up a place at Oxford or join the navy and go to war with Hitler's Germany. From the docks of working-class England to the bustling streets of 1940 New York City, Only Time Will Tell takes readers on a journey through to future volumes, which will bring to life one hundred years of recent history to reveal a family story that neither the reader nor Harry Clifton himself could ever have imagined.

“Outrageous and top-notch terror.” —Vogue on SHALL WE TELL THE PRESIDENT?

“The only difference between this book and The Day of the Jackal is that Archer is a better writer.” —Chicago Tribune on SHALL WE TELL THE PRESIDENT?

“Authentic, literate, and scary.” —Cosmopolitan on SHALL WE TELL THE PRESIDENT?

“The countdown is the thing; the pace, the pursuit, the what-next, the how-is-it-going-to-come-out…” —Boston Globe on SHALL WE TELL THE PRESIDENT?

“Holds the reader in a vicelike grip.” —Penthouse on SHALL WE TELL THE PRESIDENT?

“A compelling read.” —Newsday on A PRISONER OF BIRTH

“Dynamite…plot twists and a slam-bang finale.” —The Washington Post on A PRISONER OF BIRTH

“Archer plots with skill, and keeps you turning the pages.” —The Boston Globe on A PRISONER OF BIRTH

“Thoroughly enjoyable.” —Publishers Weekly on A PRISONER OF BIRTH

“Compulsively readable.” —Library Journal on A PRISONER OF BIRTH

“Gripping.” —The Vancouver Sun on A PRISONER OF BIRTH

“An exercise in wish fulfillment. The good may suffer, but the bad will get theirs in the end. The fun is watching it unfold.” —St. Petersburg Times (Florida) on A PRISONER OF BIRTH

“Archer plots with skill, and keeps you turning the pages.” —The Boston Globe on CAT O'NINE TALES

“The economy and precision of Archer's prose never fails to delight. The criminal doesn't always get away with his crime and justice doesn't always prevail, but the reader wins with each and every story.” —Publishers Weekly (starred review) on CAT O'NINE TALES

“Archer is back in top form with [this] latest thriller.” —Library Journal (starred review) on FALSE IMPRESSION

“Murder and a high-stakes art-world theft are cleverly blended [in this] exciting...global thrill-ride.” —Vancouver Sun on FALSE IMPRESSION

“Sail along from one high crime to the next....Archer is a great plotter....[and] in the middle of the action, [he] drops research gems.” —Liz Smith on FALSE IMPRESSION, New York Post

JEFFREY ARCHER was educated at Oxford University. He served five years as a Member of Parliament in the House of Commons and has served twenty-seven years as a Member of the House of Lords. Now published in 97 countries and more than 37 languages, all of his novels and short story collections—including Kane & Abel, Only Time Will Tell and This Was a Man—have been international bestsellers. Jeffrey is married with two sons and three grandchildren, and lives in London, Cambridge and Majorca.
Loading...
or support indie stores by buying on
(This book is on backorder)