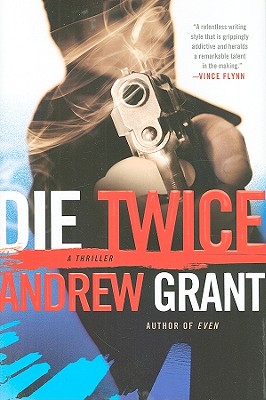 “Modern noir at its best…Here’s hoping Grant is hard at work on the next installment featuring his thoroughly compelling tough guy hero, David Trevellyan.” —Jeffery Deaver, on Even In his gritty, action-packed debut, Even, Andrew Grant introduced readers to David Trevellyan, a James Bond for the twentyfirst century. Now, Trevellyan returns in Grant’s latest, a fastpaced, modern thriller fueled by adrenaline and revenge.   Obliged to leave New York City in the aftermath of his previous mission, David Trevellyan is summoned to the British Consulate in Chicago. To the same office where, just a week before, his new handler was attacked and shot by a Royal Navy Intelligence operative gone bad. Assigned the job of finding the rogue agent and putting an end to his treacherous scheme, Trevellyan soon finds that once again, his only hopes of saving countless innocent lives lie not within the system, but in his own instincts and skills. Trust is an illusion—trust the wrong person, and it could get you killed.

Drawing comparisons to Robert Ludlum, and his own brother, Lee Child, Andrew Grant’s remarkably seasoned voice cuts a new path through the crime thriller genre, continuing to test the limits in this groundbreaking new series.

“A compelling mix of espionage, counterterrorism thriller, and kick-butt urban noir [at] a breakneck, page-turning pace.”—Booklist

“A James Bond-like British intelligence agent…Trevellyan is a great character; while larger than life, his observations of human nature make him sympathetic and intriguing.”—RT Book Reviews (4 stars)

“Grant writes thrillers like a man who has lived it, his knowledge of spycraft and the ins and outs of what is involved with an operation in this grey world of espionage strikes a little too true….Andrew Grant is a author on the rise and he and Trevellyan look to be ready for a long stay.”—Crimespree Magazine

ANDREW GRANT is a former telecommunications executive and the younger brother of Lee Child. He divides his time between England and Chicago.
Loading...
or
Not Currently Available for Direct Purchase