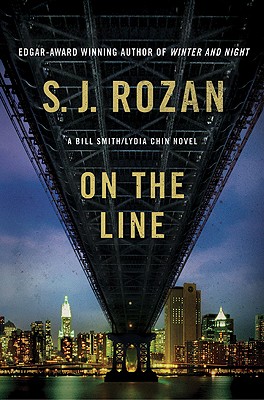 P.I. Bill Smith is sent on a high stakes chase when an electronically modified voice on his cell phone informs him that Lydia Chin, his occasional partner, has been kidnapped. Now if Bill wants to keep Lydia alive, he’ll have to play an elaborate game of the kidnapper’s devising. The first move sends him to an abandoned building where Bill finds the corpse of a small Chinese woman dressed like Lydia and the building being rapidly surrounded by police. Now Bill is on the run from the cops and in the worst trouble of his very troubled life. With the help of Lydia’s hacker cousin Linus, and Linus’s cohort Trella, Bill has to not only stay one step ahead of the cops, he has to uncover the secret behind the kidnapper’s identity and the reason he’s come after Bill, if he’s to reach Lydia before it’s too late.


Praise For On the Line: A Bill Smith/Lydia Chin Novel…

"Exciting ... Some neat twists keep the reader guessing to the surprise kick ending."
--Publishers Weekly "Fast-paced and clever, with zippy dialogue and suspenseful chase scenes, this lively thriller will leave you breathless and giddy."
--RT Book Reviews (Top Pick!) "All the twists you’d expect from Rozan."
--Kirkus Reviews "A high-velocity entry in a reliable series."
--Booklist "If you long for heart-stopping action and ... original characters ... look no further."
--Library Journal

S.J. ROZAN is the author of many critically acclaimed novels, most recently "The Shanghai Moon," and has won most of crime fiction's greatest honors, including the Edgar, Shamus, Anthony, Macavity, and Nero Awards. She lives in New York.
or
Not Currently Available for Direct Purchase