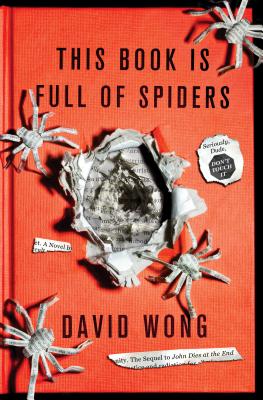 This Book Is Full of Spiders (Hardcover)

Seriously, Dude, Don't Touch It (John Dies at the End #2)

From the writer of the cult sensation John Dies at the End comes another terrifying and hilarious tale of almost Armageddon at the hands of two hopeless heroes.

You may have a huge, invisible spider living in your skull. THIS IS NOT A METAPHOR.

You can't feel the spider, because it controls your nerve endings. You can't see it, because it decides what you see. You won't even feel it when it breeds. And it will breed. So what happens when your family, friends and neighbors get mind-controlling skull spiders? We're all about to find out.

Just stay calm, and remember that telling you about the spider situation is not the same as having caused it. I'm just the messenger. Even if I did sort of cause it.

Either way, I won't hold it against you if you're upset. I know that's just the spider talking.

DAVID WONG is the pseudonym of Jason Pargin, New York Times bestselling author of the John Dies at the End series as well as the award-winning Futuristic Violence and Fancy Suits. His essays at Cracked.com have been read by tens of millions of people around the world. ZOEY PUNCHES THE FUTURE IN THE DICK: A Novel, the second book in the Zoey Ashe series, arrives in October of 2020.

Praise For This Book Is Full of Spiders: Seriously, Dude, Don't Touch It (John Dies at the End #2)…

“Kevin Smith's Clerks meets H.P. Lovecraft in this exceptional thriller that makes zombies relevant again… From the dialogue to the descriptions, lines are delivered with faultless timing and wit. Wong never has to reach for comedy, it flows naturally with nary a stumble… the most pertinent story of the genre since George Romero's Dawn of the Dead… a tighter, more concentrated read than John Dies at the End… David Wong (Jason Pargin) is a fantastic author with a supernatural talent for humor. If you want a poignant, laugh-out-loud funny, disturbing, ridiculous, self-aware, socially relevant horror novel than This Book is Full of Spiders: Seriously Dude, Don't Touch It is the one and only book for you.” —SF Signal

“The comedic and crackling dialogue also brings a whimsical flair to the story, making it seem like an episode of AMC's "The Walking Dead" written by Douglas Adams of "The Hitchhiker's Guide to the Galaxy." …Imagine a mentally ill narrator describing the zombie apocalypse while drunk, and the end result is unlike any other book of the genre. Seriously, dude, touch it and read it.” —Washington Post

“[A] phantasmagoria of horror, humor--and even insight into the nature of paranoia, perception, and identity.” —Publishers Weekly, starred review

“Violence, soy sauce and zombie survivalists abound in this clever and funny sequel to John Dies at the End (2009). One of the great things about discovering new writers, especially in the narrow range of hybrid-genre comedic novels, is realizing that they're having just as much fun making this stuff up as you are reading it. Sitting squarely with the likes of S.G. Browne and Christopher Moore, the pseudonymous Wong (Cracked editor Jason Pargin) must be pissing himself laughing at his own writing, even as he's giving fans an even funnier, tighter and justifiably insane entry in the series.... The humor here is unforced and good-naturedly gory. Anyone who enjoyed the recent films The Cabin in the Woods or Tucker & Dale vs. Evil will find themselves right at home. An upcoming (cult?) film adaptation of John Dies at the End promises to lure new readers. A joyful return to the paroxysms of laughter lurking in the American Midwest.” —Kirkus

“The rare genre novel that manages to keep its sense of humor strong without ever diminishing the scares; David is a consistently hilarious narrator whose one-liners and running commentary are sincere in a way that makes the horrors he confronts even more unsettling.” —The Onion AV Club on John Dies at the End

“Sure to please the Fangoria set while appealing to a wider audience, the book's smart take on fear manages to tap into readers' existential dread on one page, then have them laughing the next.” —Publishers Weekly on John Dies at the End

“…strikes enough of a balance between hilarity, horror, and surrealism here to keep anyone glued to the story.” —Booklist on John Dies at the End

“A loopy buddy-movie of a book with deadpan humor and great turns of phrase...Just plain fun.” —Library Journal on John Dies at the End

“Wong blends horror and suspense with comedy—a tricky combination—and pulls it off effortlessly.” —FashionAddict.com on John Dies at the End

“It’s interesting, compelling, engaging, arresting and--yes--sometimes even horrifying. And when it’s not being any of those things, it’s funny. Very, very funny.” —January Magazine on John Dies at the End

“This is one of the most entertaining and addictive novels I've ever read.” —Jacob Kier, publisher, Permuted Press on John Dies at the End

“The book takes every pop culture trend of the past twenty years, peppers it with 14-year-old dick and fart humor, and blends it all together with a huge heaping of splatterpunk gore…. Successfully blend[s] laugh-out-loud humor with legitimate horror.” —i09.com on John Dies at the End