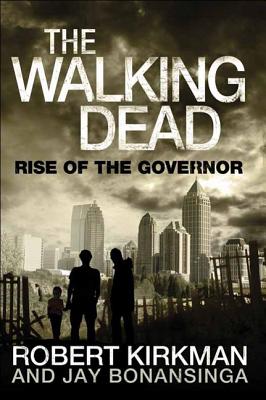 Rise of the Governor (The Walking Dead Series #1)

In the Walking Dead universe, there is no greater villain than The Governor. The despot who runs the walled-off town of Woodbury, he has his own sick sense of justice: whether it's forcing prisoners to battle zombies in an arena for the townspeople's amusement, or chopping off the appendages of those who cross him. The Governor was voted "Villain of the Year" by Wizard magazine the year he debuted, and his story arc was the most controversial in the history of the Walking Dead comic book series. Now, for the first time, fans of The Walking Dead will discover how The Governor became the man he is, and what drove him to such extremes.

“Zombie-apocalypse stories are perfect for miserable winter weather regardless, but for those obsessed with The Walking Dead (such as yours truly), this is essential reading. This is the epitome of a page-turner, and makes subway rides just breeze by. And, that end –woof.” —REFINERY29

“An excellent companion to the The Walking Dead comic books. The story is enriched by the novel format, and the characterization of the series' most hated villain is something no fan will want to miss.” —Examiner.com

“This book stands alone and is a compelling read for fans of the series or just fans of zombies. Watch out though, because once you get a taste of the particular Kirkman brand of zombie mayhem, catching up on past issues is just around the corner.” —The Ossuary

“The story makes a great novel. You'll get sucked in and can easily visualize everything that is happening. It's simply a great read.” —Comicvine.com

“It takes great advantage of the literary medium in a way that most tie-in books would not.” —TVOverMind.com

“Not for the faint of heart, this book runs on pressure-cooker suspense, graphically described bloodshed, and dark acts of brutality...This riveting character study adds a new dimension to the oeuvre by fleshing out established characters and plot lines.” —School Library Journal

JAY BONANSINGA is a critically acclaimed horror novelist whose works include Perfect Victim, Shattered, Twisted, and Frozen. His debut novel, The Black Mariah, was a finalist for a Bram Stoker award.
Loading...
or
Not Currently Available for Direct Purchase