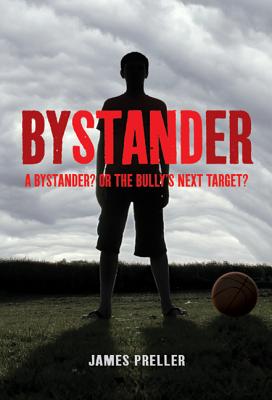 “Eric, the new kid in school, is befriended by the impossibly perfect and charming Griffin, who conceals a mean streak. When other kids are victimized, Eric must choose whether or not to intervene. Many kids will recognize this situation, and Bystander makes a great launching pad for discussions of bullying and its consequences.”
— Kelley Drahushuk, The Spotty Dog, Hudson, NY
View the List

Eric is the new kid in seventh grade. Griffin wants to be his friend. When you're new in town, it's hard to know who to hang out with—and who to avoid. Griffin seems cool, confident, and popular.

But something isn't right about Griffin. He always seems to be in the middle of bad things. And if Griffin doesn't like you, you'd better watch your back. There might be a target on it.

As Eric gets drawn deeper into Griffin's dark world, he begins to see the truth about Griffin: He's a liar, a bully, a thief. Eric wants to break away, do the right thing. But in one shocking moment, he goes from being a bystander . . . to the bully's next victim.

“Preller has perfectly nailed the middle school milieu, and his characters are well developed with authentic voices. The novel has a parablelike quality, steeped in a moral lesson, yet not ploddingly didactic. The action moves quickly, keeping readers engaged. The ending is realistic: there's no strong resolution, no punishment or forgiveness. Focusing on the large majority of young people who stand by mutely and therefore complicitly, this must-read book is a great discussion starter that pairs well with a Holocaust unit.” —School Library Journal, starred review

“Bullying is a topic that never lacks for interest, and here Preller concentrates on the kids who try to ignore or accommodate a bully to keep themselves safe. For Eric to do the right thing is neither easy nor what he first wants to do, and the way he finds support among his classmates is shown in logical and believable small steps. Eminently discussable as a middle-school read-aloud, [with] appeal across gender lines.” —Kirkus Reviews

“Preller displays a keen awareness of the complicated and often-conflicting instincts to fit in, find friends, and do the right thing. Although there are no pat answers, the message (that a bystander is hardly better than an instigator) is clear, and Preller's well-shaped characters, strong writing, and realistic treatment of middle-school life deliver it cleanly.” —Booklist

“Plenty of kids will see themselves in these pages, making for painful, if important, reading.” —Publishers Weekly

“An easy pick for middle school classroom and school libraries, this book is a worthy addition to collections focused on bullying and larger public libraries, especially those with an active younger teen population.” —VOYA

“If Judy Blume could write a book about Little League, about its players' deepest fears and secret dreams, it might come out something like this.” —Publishers Weekly, starred review on Six-Innings

“Dishing up a rare example of a character-driven tale that is also suspenseful and exciting, [Preller] chronicles a magnificent championship game between two Little League teams that is as much about the players as the plays.” —Booklist, starred review on Six-Innings

“Following the play-by-play builds suspense and brings the reader right into the action and the special world of baseball and the people who love it.” —Kirkus Reviews on Six-Innings

“A tale of baseball, friendship, growth, and coming to terms with hardships, this fast read will grasp any reader who enjoys sports.” —School Library Journal on Six-Innings

“This is a book whose emotional pull creeps up on you, pitch by pitch....Like the boys on the field and in the press box, readers will feel this is a game to remember.” —Shelf Awareness on Six-Innings

James Preller is the author of the popular Jigsaw Jones mystery books, which have sold more than 10 million copies since 1998. He is also the author of Bystander, named a 2009 Junior Library Guild Selection, Six Innings, an ALA Notable Book, and Mighty Casey, his own twist on the classic poem, “Casey at the Bat.” In addition to writing full-time, Preller plays in a men’s hardball league and coaches Little League. He compares coaching kids to “trying to hold the attention of a herd of earthworms.” He lives in Delmar, New York with his wife, three children, cats and dog.
Loading...
or support indie stores by buying on